On Wednesday the first preseason test match: At 6.30 p.m Haching is coming at Trento 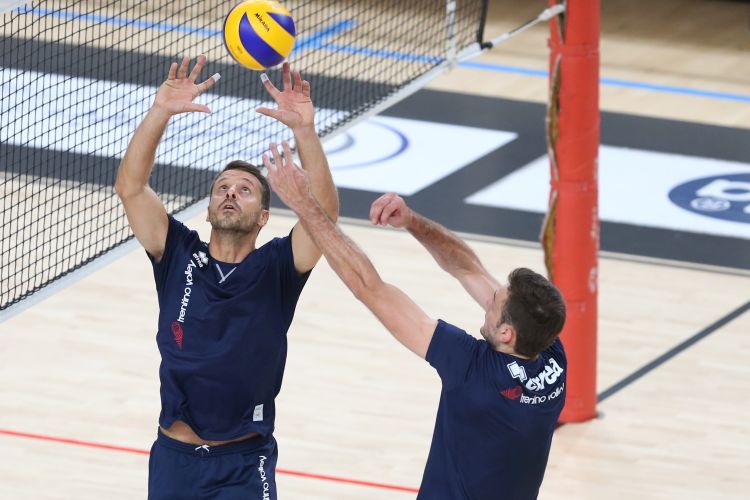 After almost a month of preparation, which mostly took place at the BLM Group Arena in Trento, the team of Itas Trentino is going to play his first seasonal test match in front of its own crowd. On Wednesday 19th September, starting from 6.30 p.m. at the BLM Group Arena, for the first time the players of Trentino Volley will measure their performances against an opponent: the Austrian team named Hypo Tirol Alpenvolleys Haching.
The match - not official and during the normal training time - is free entry and it will give Angelo Lorenzetti the opportunity to judge the work of the five players who trained in this first period.
Since the limited number of available players of the official roster, the coach of Trentino Volley will recruit the Under 20 group: besides Vettori, Daldello, De Angelis, Codarin and Cavuto (the only one not sure because of an ankle problem), on court could play Acuti (middle-blocker), Pizzini (setter), Poggio (opposite spiker), Zanlucchi (libero) and Bonatesta, Franceschini, Leoni e Michieletto (wing spikers): all of them will then play the Serie B championship. Hypo Tirol Alpenvolleys, company which brings together two realities of different countries (the Austrian Innsbruck and Haching itself) and that competes for the Bundesliga (concluded with a fourth place in the last edition), will be present in Trento with almost the full team: the only missing one for sure is going to be the opposite Hodge from Australia, who at the moment is in Bari joining the national team during the 2018 World Cup. The Austrian roster has a purely international profile; the Slovakian coach Stefan Chrtiansky (father of the spiker who played for Trentino Volley during the season 2012/13) can count on four Brazilians (including the setter Gelinski and the middle-blocker Douglas), two Austrians (including the libero of the Ringseis national team), one from Poland (the attacker Halaba), one from Russia (the opposite Klets) one from United States (the middle-blocker Pollock, ex Roma), one fellow countryman and only one German.
The match will be transmitted real-time on www.trentinovolley.it: the official site will offer the live step by step as well as the live commentary of every set on its home page, just a few seconds after its end. Real-time updates will be also posted on the Facebook profiles (@trentinovolleysrl) and the twitter ones (@trentinovolley).