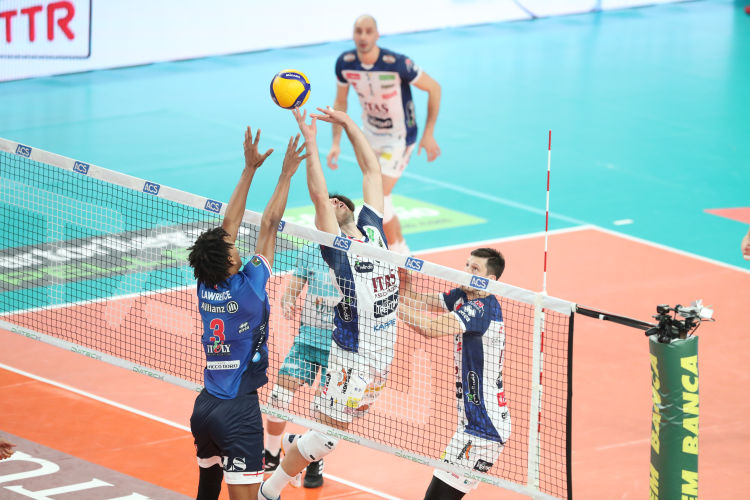 Here’s the match report. There are no surprises in the starting six line-up; after thirteen days of Sbertoli’s absence at set, Itas Trentino propose Kazyiski (awarded with the championship’s mvp title for the month of October before the kickoff) as opposite spiker, Lavia and Michieletto as hitter spikers, Lisinac and Podrascanin as middle blockers, Laurenzano as libero. Allianz Milano must do without Loser and Piano and replies with Porro as setter, Patry as opposite spiker, Mergarejo and Ishiwaka as hitter spiker, Vitelli and Ebadipour as middle blocker and Pesaresi as libero.
The hosts have a better impact on this match, who converted the starting 4-3 score for the yellow-blue team to a 6-9 thanks to Patry and the net difficulties of the locals. Lorenzetti interrupts the game, but when it restarts, Itas Trentino struggles to get the comeback against the opponents, who show a high efficiency during the sideout phase (8-11 and 10-13). Milano goes further with the score thanks to Vitelli (12-16, ace on Lavia – immediately replaced with Džavoronok) and takes advantage of a Kaziyski’s direct error to keep the +4 (14-18).  Porro’s ace (14-19) secured the first set; the hosts constantly get a hit during the reception phase (18-22) and fail to recover the gap (20-25).
The second set does not start well; Džavoronok remains on the court at the place of Lavia, the Lombard players regain the initial disadvantage (3-2) and with Patry and Ishikawa score again (5-7 and 5-9), forcing the yellow-blue team’s technical staff to use the two timeouts available one after the other. At the most difficult moment, Trento recovers; Kaziyski makes break points in turn, also in bump, and the defense begins to mix up with the guest strikers. Quickly, it's 11-10 for the host team and then 15-12 and 17-12, as the captain no longer stops scoring, well backed up by Lisinac's serves and strikers in position 4. Itas Trentino limited Allianz's comeback attempt (18-17 and then 23-19) thanks to the net contribution of the Serbian middle players, bringing back the set tally as early as 25-21.
Itas Trentino gets some points in the early part of the third set, when Milan immediately puts pressure with serve and block and transforms the breakpoint opportunities that happen to be around (2-7). Lorenzetti calls time out, but his directions do not give back lucidity to Sbertoli and his teammates, who suffer the opponent's block and do not score (4-12), overwhelmed by Patry during the break point phase. Podrascanin's serves makes the yellow-blue team pull itself back together partially (7-12), but it's just a moment because then also Kaziyski makes a mistake and Michieletto gets blocked: so the disadvantage becomes very heavy again (7-15). Trentino coach wants Lavia to get on the court once again, but also Nelli and D'Heer, without significant results (12-19 and 12-21). The 2-1 for the guest team, comes on 15-25 with Ishikawa, great protagonist.
In the fourth set, the yellow-blue team (once again back on court with Lavia) gets back strength and with a clarity of mind at the net, immediately finding a double advantage with Lisinac (6-4); a margin they keep until 10-10 as Patry comes back to rule. The French player also hits the hosts second line on serve (12-14), but Podrascanin replies (16-15 and 17-17) with a block and an attack. The match became tight in the final phase of the set; Milan took the lead again with Ishikawa (19-21) and scored with Vitelli (slash, 20-23) for the point that basically decided the match (22-25).