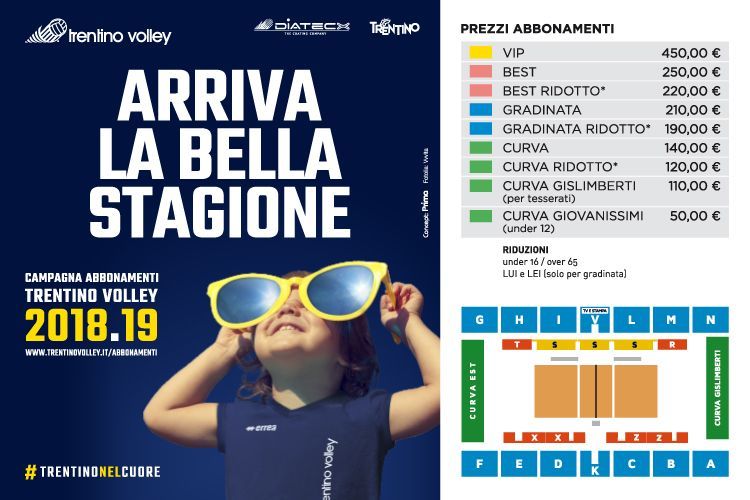 According to collective imagination the fine weather coincides with the beginning of summer and a period of relax. For the fans of Trentino Volley this period means having the possibility to go again to the BLM Group Arena. Trentino Volley has launched today its seasonal ticket campaign for 2018/2019 which was relised for the third consecutive year in partnership with Prima of Trento an agency of communication. All the details will be presented this afternoon at Grand Hotel Trento which will be attended by managers, sponsors, fans and media but also by Simone Giannelli and Oreste Cavuto.
As usual the province of Trento will be papered with representative images and will use also press releases, newsletter and social networks.

Here all the details of Seasonal Ticket Campaign 2018/2019 of Trentino Volley
Season ticket and prices. The season tickets 2018/2019 includes 18 official home matches: 13 of Regular Season Credem Banca, the return match of the sixteenth of 2019 CEV Cup of 5th of December and other four matches that still have to be decided among Coppa Italia or Play Off Scudetto. Prices: between 450 euros of the Vip seson ticket and the 50 euros for the under 12 for the curved sector.
Sectors. PalaTrento will be divided in four sectors Vip, Best and Stand will be numerated where people can sit comfortably. Gislimberti’s curved sector won’t be numerated. People can’t buy the season ticket for the East curved sector which is for the hosts’ fans.
Sale Online. Thanks to Vivaticket people can buy the season ticket at the link www.trentinovolley.it/abbonationline. You will find there all the instructions to buy the season ticket.
Pre-emption. The subscriber of the season 2017/2018 can exercise the pre-emption until the third of August. One can exercise the pre-emption also by internet www.trentinovolley.it/abbonationline.
Reductions. The reduced prices regards under 16 and over 65 in eac sector (Vip excluded). There will be the “Lui&Lei” promotion also this year: two reduced season tickets in the Stand.
Special Discount for Under 12. Only 50 euros for the curved sector thanks to the promotion “Giovanissimi”.