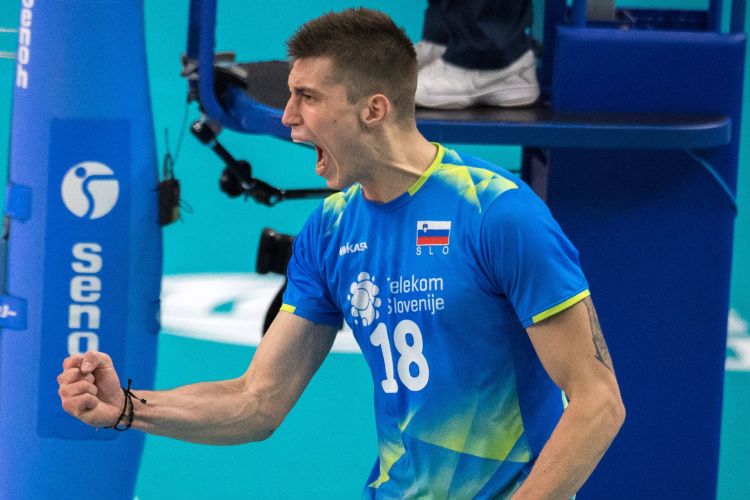 Less than two weeks after the end of the 2018/19 season, Trentino Volley has already concluded the first important market operation in sight of the upcoming season. As a reinforcement another spiker was added in the roster, Klemen Cebulj, the Slovenian outside hitter just signed a one-year contract.
It is a great achievement: the 27-year-old spiker, native of Slovenj Gradec is worldwide one of the most talented attackers and was hired to stand side-by-side with Kovacevic and Russell thanks to his efficiency. He joined after a season in the Chinese championship, won as a player of the Shangai’s team and now is about to take part in the Italian SuperLega, a circumstance he knows well since he has played six complete season with San Giustino (become a player very young), with Ravenna, Civitanova and Milano. With the last one he also took part in the final part of regular season and in the quarterfinal of Play Off Scudetto. The statistics tell us that Klemen has scored 1,522 points in 140 matches played in Italy, with 124 aces, 141 blocks and, above all, with 48% attack efficiency. Cebulj is an important player also for the Slovenian team: with him it won the European Golden and reached the second place of the European championship in 2015. He is the third Serbian player of Trentino Volley’s history, he will wear the shirt number 18 after Urnaut and Kozamernik.
“During next season we will take part again in CEV Championship League and because of this we absolutely needed to reinforce our team - declared Trentino Volley’s president Diego Mosna - . Cebulj is what we were looking for; we are sure he will effectively contribute to the cause, not just during the matches but also with the training. Our market operation start well with his arrival, even though we don’t want to change much in a roster that has done so well in the last season”.
“Klemen Cebulj is a player that can provide the physical aspect during some determined moments of the season, an aspect that sometimes we hadn’t during the championship that just ended” added the coach Angelo Lorenzetti