Stats, against Verona the 300th home win of our history 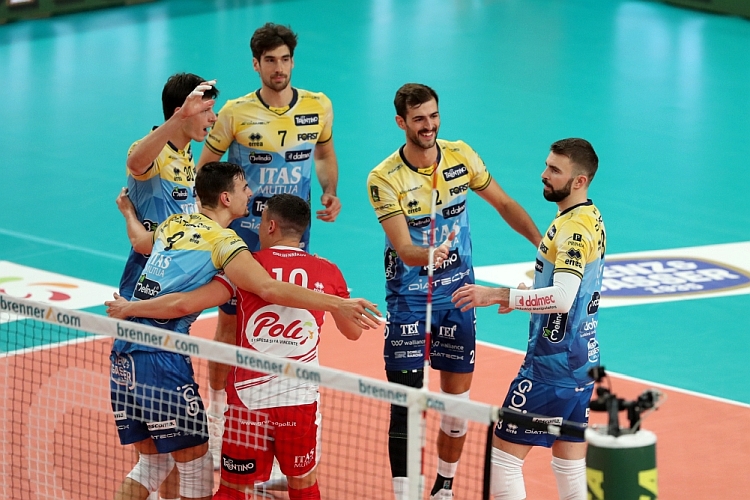 The success versus Verona has a particular value also from a statistical point of view: the 3-2 victory imposed on Calzedonia coincided with the 300th home win in the twenty-year history of Trentino Volley, which at the BLM Group Arena (until 2018 "PalaTrento") has played a total of 376 games, claiming wins by 79.7% and writing in front of its fans many important pages of its path.The suffered but very important success notched up Saturday night at the BLM Group Arena against Verona in the derby of the Adige, which opened the fourth round of the 2019/20 SuperLega Credem Banca regular season, has allowed Itas Trentino to remain unbeaten in the championship: the team claims four games played and four wins, with eleven of the twelve available points earned in the league standings.
The great continuity of performance shown in the last six seasons has significantly contributed to the excellent home efficiency; just think that between 2014 and 2019 the team have clinched 102 victories, with a consecutive record streak of twenty-three wins gained between October 2, 2016 and April 22, 2017. To celebrate the first home win, the team did not have to wait at all: indeed, the number 1 success is dated October 22, 2000 in the home match that marked the debut of its history (3-2 versus Padua). The seasons with the most prolific home matches were, on equal merit, those of 2014/15 (ended with the fourth championship) and of 2016/17 (the first with Lorenzetti as coach): 23 victories out of 24 matches played. The most frequently faced opponent is Modena (32 matches played in Trento), which, along with Piacenza (by sheer coincidence next opponent at the BLM Group Arena), is also the most often defeated (24 victories).
Here below the detailed list of the most important Trentino Volley victories played in Trento: