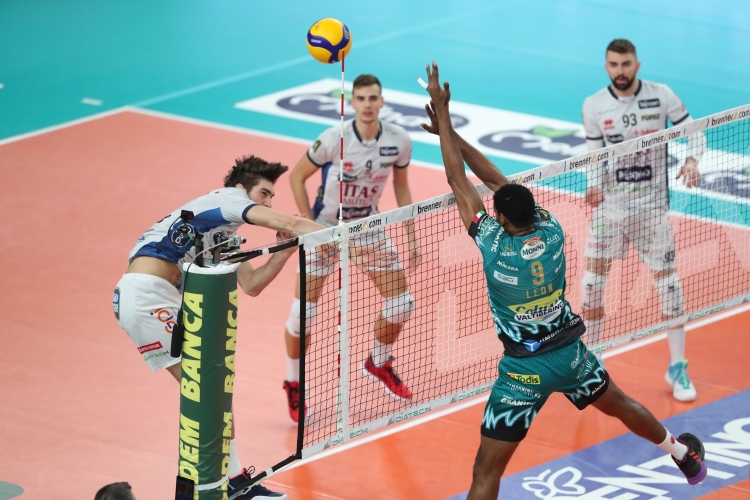 One month after the semifinal of Del Monte® Supercoppa 2019, Sir Safety Conad Perugia still wins over Itas Trentino. Our team had to meddle with the third seasonal loss of SuperLega Credem Banca 2019/20, this afternoon, leaving a 1-3 win to the opponents, like it has already happened in Civitanova, thirty days ago. This way the team from Marche are now four points ahead of the World Champions, who are now ranked fourth.
The opponents took soon the lead in today’s big match, they made good use of the mighty of their attack (57% attack efficiency as a team, with Leon and Atanasijevic in great shape) and their service, that has created many decisive break times in the won sets. Trento managed to find the right answer only in the second and partially in the fourth, but the ideas behind the second line of Cebulj as well as the attacks of Kovacevic and Vettori could do little, not allowing the team to answer point after point until the very end. Kovacevic has been Itas Trentino’s best player (15 points with 62% attack efficiency), assisted by Grebennikov as usual and by Candellaro, perfect in the first set (100%), present also in the blocking and serving phase.

Here is the chart of the thirteenth day of regular season of SuperLega Credem Banca 2019/20 played tonight at the BLM Group Arena in Trento.