SuperLega, the first 2020 match at the BLM Group Arena 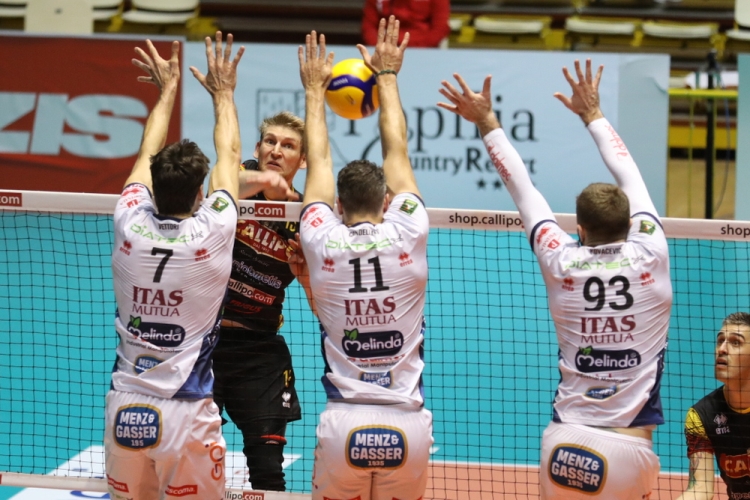 SuperLega Credem Banca 2019/2020 again on the field for the 16th regular season round: the match will be played on Sunday, January 19. In this occasion Itas Trentino will face the first 2020 home game against Tonno Callipo Calabria Vibo Valentia. The match will start at 6:00 PM, transmitted live on Radio Dolomiti and Lega Volley Channel.

HERE ITAS TRENTINO After the last victory in Monza (3-0) the Gialloblù roster will go to Milan to play the quarter-finals of Coppia Italia, Civitanova and Istanbul (Champions League).

“The one that has just started will be a season in which we are going to travel a lot: we will play very few home matches. Among these there is the one with Vibo Valentia – said the coach Angelo Lorenzetti presenting the program. Apart from this, I would like to see the team improve In every single match, starting from the one we are going to play against the Tonno Callipo Calabria. This one is a team that in the last five matches showed their talent. Its results confirm the awaits everybody had before the Championship begin. This means we are going to play, ready to fight because finally we can do it smoothly.”

The technician from Marche can count on the whole roster: they will train today in the afternoon at the Sanbapolis sport hall, and tomorrow morning at the BLM Group Arena. The match against Vibo Valentia will be the 833th official one in Trentino Volley history, the 384th at home, where the Gialloblù Club will seek for the 582nd victory; this would be the 305th in front of its own audience.
THE OPPONENTS Not playing since last December 22nd - first because of the rest round in correspondence with the first day of the return round and second to face the unavailability of the last hour of the game (which postponed the match with Padua on January 16th), the Tonno Callipo Calabria Vibo Valentia comes to Trento trying to gain points and to improve its ranking, trying to move away from the relegation zone. After a difficult start, the line-up coached by Juan Manuel Cichello found more continuity of the results in the second half of the first leg: Cisterna placed second-to-last place, with nine points. In the roster there are important people, starting from the director and captain Baranowicz,  the talented American crusher Defalco (7th forward in the tournament) and the three players who just a week ago played in the final of the Olympic qualifying tournament in Berlin: the French Chinenyeze (middle blocker) and Carle (lateral) and the German Hirsch (opposite), who often alternated in the first twelve games on the Giallorossi half with the Brazilian Aboubacar. In the first part of the season, however, it was Rizzo (8th league receiver) and the central Mengozzi, the most prolific of the Calabrians in the important block (23 winning blocks).
PREVIOUS ENCOUNTERS Trentino Volley and Callipo Sport Vibo Valentia have a long tradition of matches behind them, started more than fifteen years ago (October 3, 2004) with the first official match in regular season (away win at the tie break for our team). The face-off outcome of thirty-two previous matches, including five Play Off and two Coppa Italia matches, is clearly favourable to our team (27-5). Trento boasts, among other things, eleven victories in the last thirteen matches played; the most recent win of Vibo Valentia is the 3-2 home win clinched on 11 December 2016. The last direct clash dates back to November 6, 2019, in the match of the first round played at the PalaCalafiore in Reggio Calabria (3-1 for Trentino Volley, with scores 25-16, 21-25, 25-18, 25-22 and Kovacevic mvp). At the BLM Group Arena, the Calabrians won only once (3-1 on October 7, 2012) out of fifteen previous matches; the most recent match played in Trento is dated November 1, 2018: 3-0 win for the hosts.
THE REFEREES The match will be directed by Andrea Puecher (first referee from Padova, in Serie A since 2003 and international since 2013) and Stefano Caretti (second referee from Rome, in Serie A since 2016). Puecher is at his sixth seasonal refereed match in 2019/20 SuperLega Credem Banca; among these six matches, he refereed one Trentino Volley match, the away win in Milan on 17 November (3-1). This is Caretti's second match in this regular season, the first ever in his career to referee a Trentino Volley encounter.
TV, RADIO AND INTERNET COVERAGE: The match will be reported live and in full by Radio Dolomiti, media partner of Trentino Volley. The reporting with the BLM Group Arena will be made within "Dolomiti Sport Show", the sports broadcast of the radio station in via Missioni Africane. The frequencies to tune into the regional network are available on the website www.radiodolomiti.com, where it will also be possible to listen to the live streaming radio report.
There will also be live streaming video coverage on the "Lega Volley Channel" web space, at www.elevensports.it (paid service). On TV, the full deferred match will be broadcast on Monday, January 20th at 10 pm, on RTTR - tv partner of Trentino Volley. On the internet, point to point updates will be made by the website of the Lega Pallavolo Serie A (www.legavolley.it) and by our website www.trentinovolley.it and we will always keep you up to date through our social media (www.trentinovolley.it/facebook www.trentinovolley.it/instagram and www.trentinovolley.it/twitter).
TICKETS AND MERCHANDISING: Ticket presale is active until Saturday evening at 6 pm at the Promoevent premises, in via Suffragio 10 in Trento, and at any time on the Internet by clicking on www.vivaticket.it/ita/event/itas-trentino-vibo-valentia/145608. The coupons will also be available on Sunday at the ticket office of the BLM Group Arena, which will be open from 5 pm, exactly when the entrances to the building will be opened. Inside the arena, behind the long stand on the north side, fans will find at their disposal our merchandising point; on sale a wide range of Trentino Volley items, including the new celebratory jerseys. On this occasion the BLM Group Arena will host the students of three middle schools in Trento (Gardolo, Civezzano and Salesiani); an initiative that is part of the "BIG School" project being carried out by our club for about ten years.