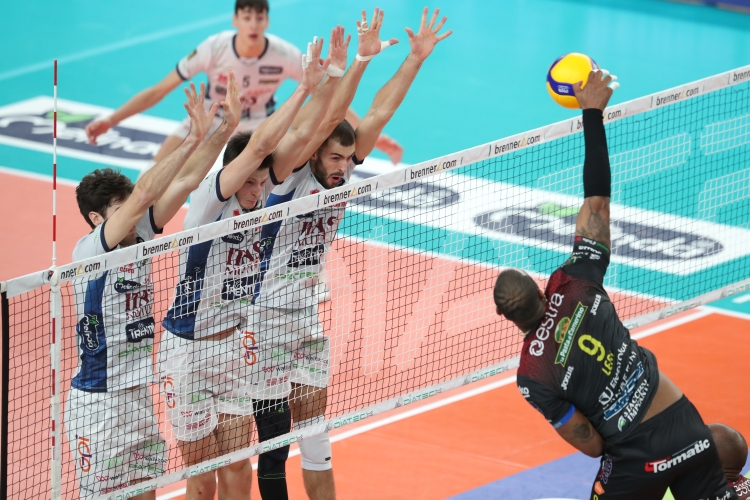 The Final Four of Del Monte® Coppa Italia 2020 begins on Saturday, 22 February at the Unipol Arena in Casalecchio di Reno (Bologna). Itas Trentino will play in the first semi-finals against Cucine Lube Civitanova: the starting whistle is planned for 16:00. Live coverage on RAI Sport + and Radio Dolomiti.
HERE ITAS TRENTINO The team approaches this very important appointment after the qualification for the quarter-finals of 2020 CEV Champions League while being in the fourth place in the ranking of SuperLega. Even though Giannelli and his teammates don't have the favours of the prediction and haven't really had time to prepare for the appointment, they won't give up easily and they will try to regain, against the historical adversary Civitanova, the access to the final of the Italian Cup, which they obtained the last time at the Unipol Arena three years ago.
“It is an amazing appointment, only attended by great teams and we are glad to be among those this time as well – affirmed the coach Angelo Lorenzetti - . We can’t take for granted that we will play on the same level in these semi-finals, because in the previous matches of the season Cucine Lube proved to be ahead of us. But we want to fight in order to overturn the prediction; in occasions like this one, great players get excited and I’m sure that mine will want to be protagonists, because they have everything they need to do so. We get to this Final Four after having played, in the last period, only against ranked teams: we hope to exploit the faster rhythm that we picked up”.
The team got to Bologna at lunch time and then had a session of technical training at the Unipol Arena early in the afternoon for about an hour and a half, the perfect occasion to get familiar with an enormous hall and to check the conditions of the players. Itas Trentino will come to the appointment with fourteen players, including the young spiker Alessandro Michieletto. Lorenzetti recovers Djuric while Kovacevic will be on the bench.
Saturday’s match will be the 843rd official match in the history of Trentino Volley (report: 588 victories and 254 defeats), the 456th away match, of which Trento won eleven times this season, only losing in three occasions (twice in Civitanova and once in Modena).
THE HISTORY OF TRENTINO VOLLEY IN COPPA ITALIA Tomorrow it will be the thirteenth Final Four of Coppa Italia for Trentino Volley; it took part eighteen times in the competition, with one victory in 2010 after the semi-finals against Modena (3-0) and the final against Cuneo (3-1, on 31 January in Montecatini) and two victories in the solar year 2012: 2011/12 edition at the PalaLottomatica in Rome against Belluno (3-0) and Macerata (3-2), between 18th and 19th of February, and 2012/13 edition at the Forum of Assago against Vibo Valentia (3-0) and Macerata (3-1) between the 29th and the 30th of December. In the other editions Trento had been stopped three times by Cuneo (3-0 in each case, on 2 February 2002 at the Forum of Assago, on 28 January 2006 at the Palafiera in Forlì in the semi-finals, on 23 January 2011 at the PalaOlimpia in Verona in the final), once by Piacenza (1-3 on 8 March 2014 at the PalaDozza in Bologna); in the 2014 and 2015 editions Trento lost the final against Modena (on 11 January 2015 and 7 February 2016), in the 2017 edition against Civitanova, in 2018 the semi-finals against Perugia in Bari (on 27 January 2018) and last year against Lube again in the semi-finals (2-3, on 9 February). Up till now Trentino Volley has played forty matches in Coppa Italia with twenty-three victories, including the latest one (on 23 January 2020, 3-0 in Milano). The player with the highest number of appearances in this competition with the jersey of Itas Trentino remains Colaci who, between 2011 and 2017, took part in 21 matches. Giannelli is the one of the current roster with the most appearances (14); Vettori (3 times), Candellaro, Grebennikov, Russell and Kovacevic (1) are the team members who have already written their name in the roll of players.

THE OPPONENTS Cucine Lube Civitanova is strong of the supremacy in SuperLega standings, to be shared with Perugia, which however played one match more, of the qualification for the quarter finals and of the championship and the World Championship title obtained in December. Now it returns to the Unipol Arena (where three years ago it won the fifth Italian Cup in its history against Trento), being the great favorite on the eve of the final victory. The twenty-sixth overall participation in the competition began smoothly, with a clear 3-0 in the quarter-finals against Monza and now continues with the challenge to the team with which it has already played three times this season and which it will face next 8th March in the championship. Coach Ferdinando De Giorgi (who won two editions of the trophy on Lube's bench, 2008 and 2009) for the occasion can also count on Leal, who has rested in the last match of Champions against Trento, but is already back in the starting sextet since a couple of games with excellent results. To try to reach the fourth consecutive final (the one in 2019 was lost at the tie break with Perugia), Civitanova will rely on his return but also on Simon and Juantorena, often lethal for Trento in the last direct clashes.
THE FINAL FOUR PROGRAM On Saturday, 22th February at Unipol Arena the semi-finals will be played; after Trento-Civitanova, at 18.30 there will be the match between Perugia and Modena. The following day, on Sunday, 23th February, the final between the two winners will take place at 18.00. All the competitions will be broadcast live on RAI Sport +.

PREVIOUS MATCHES The first semi-final will enhance a challenge, which has already taken place three times in the last four editions (seven in total) and under nine circumstances in the last thirteen months, also taking into account the challenges played between regular season, Play Off Scudetto, Coppa Italia and Champions League. Trento-Civitanova is a classic for Italian volleyball, as shown by the seventy-one official matches already in the archive (only Modena with 74 has played more against our team); the balance favours Lube for 39-32, especially thanks to eighteen wins in the last twenty games. The only recent victories in Trentino are those in the 2018 World Club Cup Final  (3-1 in Czestochowa) on December 2 and game 3 in the semi-final Playoff on 22nd April (3-1 in Trento).  The previous matches were all won by the opponents: 3-1 in the BLM Group Arena on 22nd December and 13th February, 3-0 in Civitanova on 26th January. Two wins also at the Unipol Arena, right in Coppa Italia: 29th January 2017 (final won 3-1 by Lube) and 9th February 2019 (semi-final won by the Marche region at the tie break).

REFEREES Fipav has designated the eight referees who will lead the semifinals and finals, without, however, making the composition of the pairs in the individual matches known yet. The squad can count on Stefano Caretti (from Rome), Stefano Cesare (Rome), Massimiliano Giardini (Verona), Giorgio Gnani (Ferrara), Andrea Puecher (Padua), Daniele Rapisarda (Udine) and Alessandro Tanasi (Noto - Syracuse). All boast at least one seasonal precedent compared to Trentino Volley.

TV, RADIO AND INTERNET The challenge will be a global media event, enjoying contemporary live coverage on TV, radio and internet. It will be broadcast by RAI Sport +, a channel present both on the digital terrestrial platform (number 57 in HD, 58 in sd) and on Sky's satellite platform at number 227, with commentary by Maurizio Colantoni and Andrea Lucchetta; the images will also be broadcasted on the Internet in video-audio streaming via the RaiPlay application and will have continental visibility (twelve nations connected) thanks to live coverage programmed by Sportklub (Serbia, Kosovo, Croatia, Bosnia Herzegovina, Slovenia, Macedonia, Montenegro), Match TV (Russia), Polsat (Poland), BTV Bulgaria, DSmart (Turkey), as well as the main world betting sites served by the SportRadar agency.

As always, a direct and full coverage on Radio Dolomiti, Trentino Volley's media partner, will be available from 16.00 onwards. All the frequencies to listen to the regional network are available on the website www.radiodolomiti.com, where it is also possible to listen to the radio report in streaming, by accessing the "On Air" section.

On TV, the full delayed broadcast of the race will be aired on Monday 24th February at 22.00 on RTTR - Trentino Volley's partner TV.