23 points at debut with gialloblù jersey: Nimir immediately in the Trentino Volley history 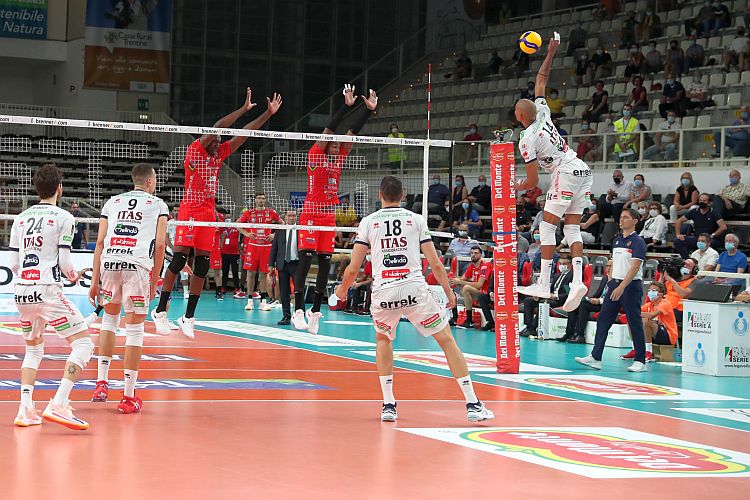 The great performance showed off on Sunday evening at the BLM Group Arena in the first leg semifinal of Del Monte® Supercoppa 2020 played against Civitanova not only has allowed Nimir Abdel-Aziz to contribute in an important way to the comeback victory of Itas Trentino, but has also allowed the opposite spiker to already enter in the twenty-year history of Trentino Volley. The 23 personal points scored, the result of 15 winning attacks, four block and four ace, represent the best score of a player in the day of its first participation with the gialloblù jersey. The previously was scored by Osmany Juantorena, (curiously in the pitch at the BLM Group Arena but with Lube), who at the debut with Trentino Volley (27 September 2009, Trento-Latina 3-1) with 22 winning points and Oleg Antonov, (same score on 24 October 2015 in Modena-Trento 3-2 of Supercoppa).
Again with regard to statistics, to underline that the victory over Cucine Lube Civitanova on Sunday has stopped a negative streak, which against Marche lasted six matches and, temporally, one year and a half. The last precedent happened with the biancorossi was on 22 April 2019 (3-2 at home in match 3 of semifinal Play Off); the tie break was, moreover, the most frequent result in the history of the confrontation between the two teams: in as many as 29 of the 74 official played matches, the fifth set was needed to settle the score between Trentino Volley and Lube.