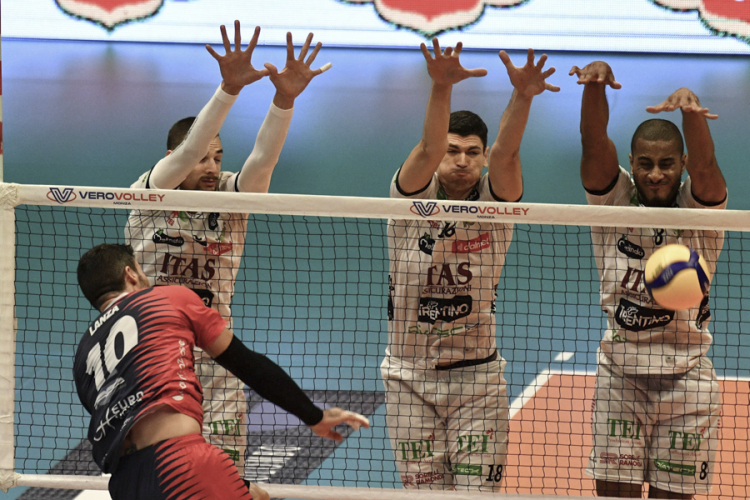 The match report. In Monza, Itas Trentino suffers the continuous absence of Michieletto, with Lorenzetti who hasn’t any doubt in confirming the sextet: Gianelli at serve, Nimir as opposite spiker, Kooy and Lucarelli as spikers, Podrascanin and Lisinac as middle blockers and Rossini as libero. Vero Volley has Orduna at serve, Lagumdzija as opposite spiker, Lanza and Dzavoronok in place 4, Galassi and Holt as middle blockers, Brunetti as libero. The beginning of the match is in favour of Vero Volley, which with service and attack tries to create a small advantage (0-2, 3-5 and 7-9), but the guests punctually counter, using the good personal openings of Nimir (block for 5-5) and Lucarelli (ace for 9-9). With two blocks, for the first time Trento takes the lead (12-11 and 14-12), thanks to the personal points of Lisinac and the Brazilian. The time out helps to clear the head of the hosts, who, with Orduna at serve (also a direct ace), first settle the score (15-15) and then take again the lead, also thanks to a block of Dzavoronok on Lisinac (16-18). In the final part, the service of Lanza is the winning difference: with two consecutive aces, the former captain of Trento takes his team to +6 (16-22), ending the first partial with 21-25.
Itas Trentino tries to take the lead during the start of the second set, counting on the powerful attacks of Kooy and Nimir that build a promising initial advantage (3-1 and 5-3), then confirmed later until 10-8. Podrascanin blocks an attack of Lanza and takes his team to +3 (12-9), forcing the Lombards to the time out; at the restart of the set Nimir viciously attacks and Giannelli blocks Dzavoronok, causing the absolute advantage (+6, 15-9). But Vero Volley comeback until the -3 (16-13) thanks to Lanza (block and counterattack) and Galassi (ace); it is only the latest attempt by the hosts to react, who then definitively leave room for the opponents (20-15 and 25-21), carried away by the attacks of Lucarelli and Nimir.
After changing fields, Trento returns to the same play of the last partial, between service and attack with a wild Nimir (6-2, 11-6). Eccheli uses two time out within minutes, without finding the right reaction and then the opposite spiker finds more and more room (18-11, 20-12) with Vero Volley that comeback only in the final (23-19), thanks also to the entry of Sedlacek for Lanza. Again, it’s thanks to Nimir that Itas Trentino goes to 2-1, on 25-19.
The fourth partial marks a new trend, with the hosts who confirm Sedlacek in the field and already find the double advantage (3-5), which then redoubles (8-12) when Lagumdzija goes wild in attack. Lorenzetti uses a time out, but the gialloblù team can no longer recover and surrenders under the increasingly precise shots of Dzavoronok and Holt as well (13-18, 15-22 and 16-25).
The tie break has exciting leadership overturnings (3-1, 4-5, 7-5, 10-12) and at the end Monza wins, with Sedlacek who capitalizes the second match ball at 13-15.