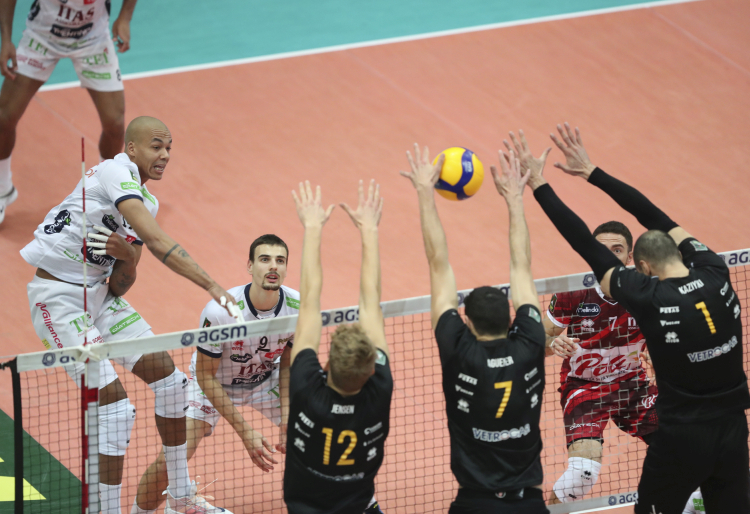 The match report. Itas Trentino presents itself in Veneto with the return of Captain Giannelli; after three matches as setter, Nimir returns in the role opposite spiker, Podrascanin and Lisinac as middle blockers, Rossini as libero, while Alessandro Michieletto completes the diagonal of place 4, Kooy's orphan, together with Lucarelli. NBV responds with Spirito as setter, Jensen as opposite spiker, Kaziyski and Jaeschke in place 4, Aguenier and Caneschi as middle blockers, Bonami libero. The start is equilibrated, with the two teams that fight point to point and often alternate in command of operations (6-5, 8-9). An attack of Kaziyski, immediately on the ball, and a block of Aguenier on Michieletto makes the double advantage of the evening for the hosts (9-11), forcing Lorenzetti to call a time out. At the restart, Lisinac scores another block to perform a comeback (11-11); Lucarelli is motivated as well and is ready in attack and net (16-16). The match continues irregularly (16-18), but Nimir enters in the match at the right time, scoring the new tie (19-19). The rush finale sees Kaziyski scoring the point of 20-22 directly at service (another time out of Lorenzetti), Trento can’t keep up (21-23) and loses the first set with an error at service of Nimir (23-25).
Itas Trentino tries to start differently the second set (6-4, ace of Nimir), but Verona immediately comebacks, also thanks to an error of Lisinac (7-9). In the central phase, Nimir starts scoring continually, relaunching the gialloblù's ambitions to win the set (14-14, 16-14); Lucarelli also plays well and the guests fly to +3 (21-18). It seems the decisive point, but it isn’t, because NBV performs a comeback (23-22), cancelling two set points and using Jensen (from 24-23 to 24-25). Thanks to a block of Caneschi on Lisinac, the hosts win (24-26).
In the third set, Itas Trentino again starts great (6-2), thanks to Lucarelli and Nimir, but Jensen and Kaziyski scores immediately (6-6). The gialloblù team suffers the backlash, it goes down by two points (7-9) but, with the Brazilian, it returns forward (13-11). Verona scores again (13-14) with Jaeschke; from then on, it is played point by point, because Trento is unable to manage the advantages it builds (from 19-17 to 20-20). Nimir and Michieletto offer the break points in the decisive moment: ace for the Dutch and block of the spiker for 24-21, which then it transforms in 25-22 thanks to another winning attack of the opposite spiker.
The guests start with enthusiasm the fourth set (6-4, 11-7), thanks to Lucarelli. NBV struggles to counter-attack, also because Nimir plays great (15-12); the Dutchman later score the maximum advantage (21-15) which definitively directs the match towards the fifth set (25-20).
In the tie break, Itas Trentino starts great (6-3), but is immediately taken up by the hosts (7-7) and then finally win (10-15) thanks to the usual Nimir.