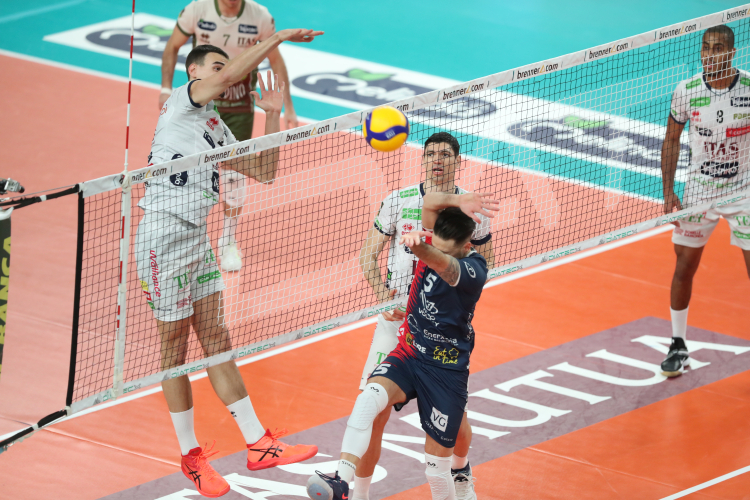 The match report. Itas Trentino has to do without Dick Kooy (on stop in the last hours due to a muscle resentment); the coach Angelo Lorenzetti proposes again the starting six that has Lucarelli diagonally to Michieletto in place 4, Giannelli as setter, Nimir as opposite spiker (awarded before the kick-off as MVP of December of SuperLega), Podrascanin and Lisinac as middle blockers, Rossini libero. Vero Volley Monza has to do without Lagumdzija and in the starting six presents Orduna as setter, Davyskiba as opposite spiker, Lanza and Dzavoronok as spikers, Holt and Beretta as middle blockers, Federici libero. At the start, the hosts do great at service: Nimir scores an ace (4-2) and Podrascanin scores breakpoints that are valid for an added advantage (8-4, time out of Eccheli). At the restart, Trento doesn’t grant anything in the phase of change ball (12-8) and widens the gap, using a positioning mistake of Orduna and an attack out of Lanza (14-8). On 16-9, Monza has already used all time outs, but doesn’t recover even with the entrance of Ramirez Pit for Davyskiba (20-13); for Itas Trentino is very simple to score the points that conclude the set (25-16, two other aces of Nimir at the end).
Vero Volley increases in attack percentages at the opening of the second set, especially with Dzavoronok; the gialloblù are in disadvantage (1-3) and couldn’t fill the gap even with the time out requested by Angelo Lorenzetti on 3-6, because Lanza score with regularity (7-10). It needs a block of Podrascanin on Lanza, a slash of Giannelli and a counterattack of Lucarelli to overturn the situation (13-12). The Brazilian spiker scores +2 (15-13), then +3 (18-15) due to a mistake of Holt at service; Monza doesn’t give up and ties (18-18) thanks to a mistake of Lucarelli and Lanza scores an ace (18-19). Lorenzetti calls a time out, but doesn’t get the desired reaction, because then Nimir struggles at the net and the guests take advantage to win the second partial, already on the score of 20-25 with a great Dzavoronok.
The comeback of Itas Trentino goes through the blocks of Nimir, which address immediately the third set (4-0); Podrascanin defends the advantage until 6-1, then Monza fills the gap (8-7), using the work at the centre of the net of Holt. Lucarelli scores (10-7), but the mistakes of Nimir (replaced by Argenta) advantages Monza (11-10). The new gap is guaranteed by the quality proposed by Podrascanin, who scores important points for the comeback (16-13). The time out of Eccheli is tardive, because then at service Michieletto further widens the gap (19-13); Nimir returns in the match and protects +6 (21-15), then Lucarelli scores for 2-1 (25-17).
Vero Volley returns to assert its authority in the fourth set with a flying start (1-3, 2-8), thanks to its block and defence. Michieletto struggles in attack, the entire team struggle in reception, without filling the gap (4-10, 7-13), also because the line of nine meters makes too many mistakes. Podrascanin scores (9-13), but it isn’t enough to reverse the trend (10-16), although Nimir returns to be effective – at least during the phase of change ball. Monza doesn’t grant anything and drags the match at the fifth set, settling accounts by 20-25.
The tie break is fought point by point in the first part (3-3, 6-6, 8-8), but with the two teams that constantly take the lead at the score. Michieletto scores the first double advantage with an ace (10-8); an advantage that Trento protects with all it has until the end (15-13, block of Nimir).