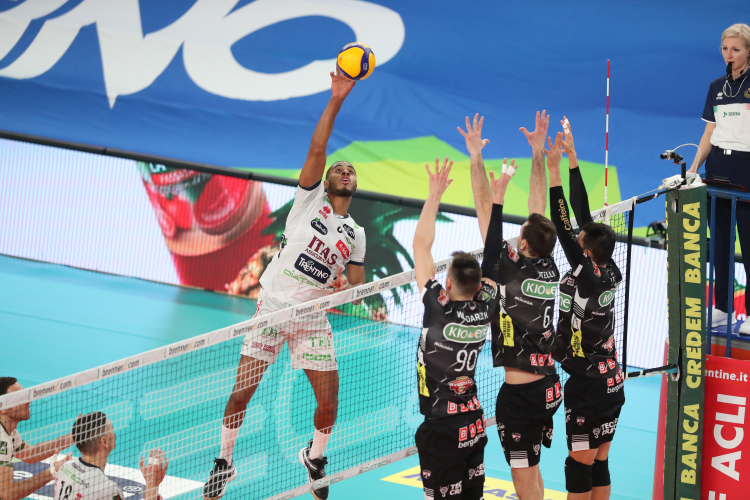 The match report. Itas Trentino has to do without Kooy and proposes on field the starting six that had the better of Monza in five sets on Sunday: Giannelli as setter, Nimir as opposite spiker, Michieletto and Lucarelli as spikers, Lisinac and Podrascanin as middle blockers, Rossini libero. Kioene Padova presents itself at the BLM Group Arena with Shoji as setter, Stern as opposite spiker, Bottolo and Wlodarczyk as spikers, Vitelli and Fusaro as middle blockers, Danani libero. The hosts wait for a few exchanges before taking the reins of the game (from 3-3 to 9-4) thanks to Podrascanin, Nimir (also an ace) and a mistake of Stern. The time out of Cuttini doesn’t produce the right countermeasures, because then Trento widens the gap (13-7, 15-8) with the Dutch opposite spiker. The final of the set is controlled by the gialloblù, who don’t grant any chance to the opponents (17-10), thanks to the continuity of the change ball and the efficacy of the breakpoint phase (19-11, 21-12) supported by a biting service. It changes field on 25-13, with the opponent coach who alternated almost all his players, without finding a reaction.
The rhythm doesn’t initially change in the second partial, in which Itas Trentino finds right away a very hard partial (6-1), the result of a good job between block, defence and counterattack (especially with Michieletto and Nimir). In the central part of the set, Lorenzetti’s formation doesn’t completely succeed in dominating, because Kioene makes a comeback with Shoji at service from 13-7 to 13-11, forcing the gialloblù to call a time out. At the restart of the match, Padova keeps high its game and ties with an ace of Stern (16-16). To win the partial, it needs the acceleration of Lucarelli’s service (ace for 20-18) and the block of Nimir on Stern (22-19). The hosts protect the advantage and go to the change of field on 2-0 with an attack of Lucarelli (25-22).
The Venetians try to react at the start of the third set with Stern (1-3 and 5-6), but the attempt of comeback is quickly stopped by a block of Podrascanin (7-6) and the service of Nimir (11-8). Kioene doesn’t give up and is still the Slovenian opposite spiker that makes the team returns in the game (13-13, time out of Lorenzetti); his ace offers an advantage to the Venetians (14-15), which becomes a double advantage when Shoji finds a point ball (17-19). Nimir ties for two times (19-19 and 21-21), but then it needs a block of Argenta on Bottolo to surpass the opponents (22-21). The final is very long; Padova cancels eleven match point (24-24, 25-25, 28-28, 32-32), but gives up at the twelfth (35-33, ace of Lucarelli).