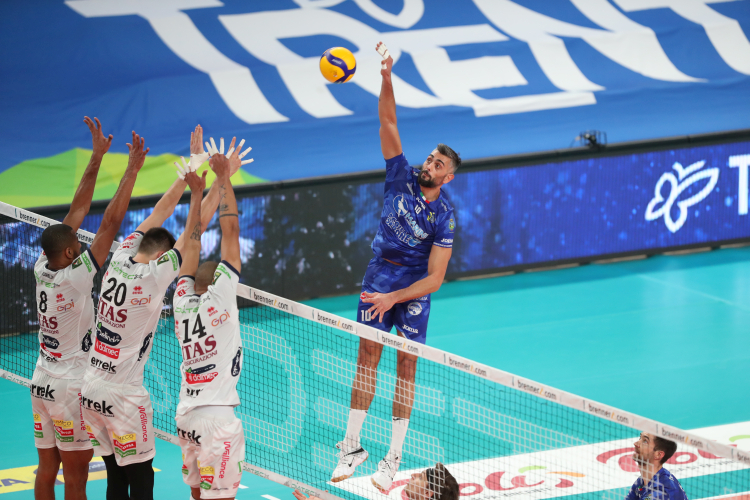 The match report. Itas Trentino has to do without Kooy, the reason why Lorenzetti doesn’t change its starting six, composed by Giannelli as setter, Nimir as opposite spiker, Lucarelli and Michieletto spikers, Podrascanin and Lisinac middle blockers, Rossini libero. Top Volley Cisterna presents itself at the BLM Group Arena without Seganov (with the Bulgarian national team), and so has Sottile as setter, Sabbi as opposite spiker, Tillie and Randazzo as spikers, Szwazrc and Krick as middle blockers, Cavaccini libero. Michieletto offers the first rift at the score with an ace valid for 7-5, but Tillie responds almost immediately with a great counterattack (9-10). The central part of the first set is balanced and fought point-by-point (10-10, 13-13 and 15-15), with the two formations that keep their change ball regularly; a block of Szwarc on Lucarelli and a score of Sabbi offer the double advantage (16-18) and the hosts call a time out. At the restart of the game, an ace of the Polish middle blocker offers +3 for the guests, which Lucarelli tries immediately to tie with a point ball (18-19). Cisterna doesn’t grant anything until 22-24, using the good work at the net of Sabbi; a block of Lucarelli on the opposite sends to the advantages the set (24-24), then won by a breakpoint of Szwarc (24-26).
On the wave of enthusiasm, the guests start well the second period as well (4-6 and 7-9), using the difficulties in defence of the gialloblù. Lucarelli ties (11-11), but then Sabbi guarantees a new +2 (time out of Lorenzetti). The reaction of Itas Trentino is late in coming, but it shows itself a few minutes late with a block of Giannelli on Tillie that ties (17-17); then an ace of Nimir and a mistake at the net of Sabbi throw Trento on 21-19. It isn’t the decisive rift, because Cisterna ties on 23-23 thanks to Randazzo; at the advantages the decisive rift is of Michieletto, who in counterattack scores 26-24, taking the game on 1-1.
The aces of Cisterna (three within seconds) characterize the start of the third set (3-6); Giannelli and teammates don’t give up and tie (8-8), using the good moment of the attack of the spikers. The match continues point-by-point (10-10, 13-13 and 16-16), with Tillie and Lucarelli who are doing great in attack. A great service of Nimir brings the breakpoint of Michieletto for 20-18, then the golden boy with a defence facilitates the attack of Sosa Sierra (22-19). In the last exchanges, there is room for an ace of Podrascanin and a set ball of the Dutch opposite spiker (25-20).
On 2-1, Itas Trentino tries everything to cast aside the opponent, and with Nimir and Michieletto scores immediately 6-3 in the fourth set. Cisterna tries to recover with Sabbi (7-6), but then it’s the gialloblù spiker who widens the gap (11-7). Podrascanin actively participates in the gialloblù comeback (15-10 - counterattack, 18-12 - ace) and guides his team to the win (22-18 and 25-18, ace of Michieletto).