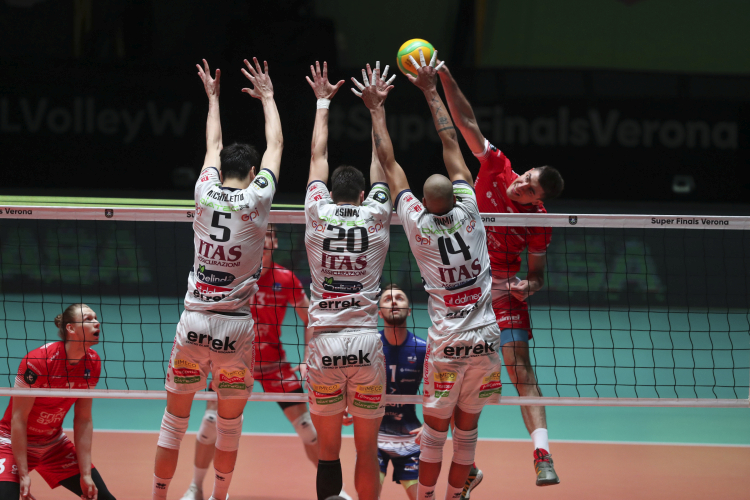 The match report. Trentino Itas presents itself at the AGSM Forum in Verona, unfortunately behind closed doors also for this extraordinary event: Giannelli as setter, Nimir as opposite spiker, Lucarelli and Kooy in place 4, Lisinac and Podrascanin as middle blockers, and Rossini libero. Groupa Azoty Kedzierzyn-Kozle responds with Toniutti as setter, Kaczmarek as opposite spiker, Semeniuk and Sliwka as spikers, Smith and Kochanowski as middle blockers, Zatorski libero. The start of the gialloblù team is on fire, thanks to a block of Lisinac and an ace of Kooy (4-1); over the course of time, the gap is quickly reduced (8-6) until 10-10 with a great moment at the net of Smith. The central part of the set is fought point-by-point (14-14, 18-18), then Sliwka creates +2 (19-21), which the gialloblù team immediately manages to catch up. Smith with an ace on Rossini scores the new advantage (21-23) that wins the partial, because Kaczmarek defends the score (22-25).
Trentino Itas tries to start the second set with aggressivity thanks to the service of Nimir (3-0), but, just as happened in the previous set, Groupa Azoty recovers quickly the disadvantage, finding the tie with Sliwka on 9-9. In the central part, two aces of Semeniuk creates the gap (from 12-12 to 13-17), also because Lucarelli struggles to pass in attack and Trento doesn’t manage to be sharper (17-20 20-23) in the breakpoint phase, never finding the moment to reduce the gap (22-25).
In the third set, Lorenzetti sends Michieletto on the field, replacing Kooy, as it had already done in the final phase of the previous partial. Thanks to Nimir and Lucarelli, Trento starts well (6-1), but also in this case, Grbic’s formation reduces easily the gap (9-9). In the central part, the gialloblù scores also at blocking thanks to the Dutch opposite spiker (17-14); Kedzierzyn-Kozle becomes nervous, begins to miss some easy balls, and the Italian formation takes advantages of this to go to 25-20, which restarts the match.
In the fourth set, Groupa Azoty starts better than Trento (5-7); it is providential the time out of Lorenzetti, because, at the restart, Giannelli and teammates go to 9-4 thanks to Nimir and continues until 14-11. Zaksa doesn’t give up and reduces the gap thanks to Sliwka and Kaczmarek (20-21). At the end of the set, the Polish team wins on 26-28, after Trento cancelled three match points; the fourth was the decisive one: Kaczmarek scores it.