2020/21 Season in archive, notes and statistical curiosities of the gialloblù team 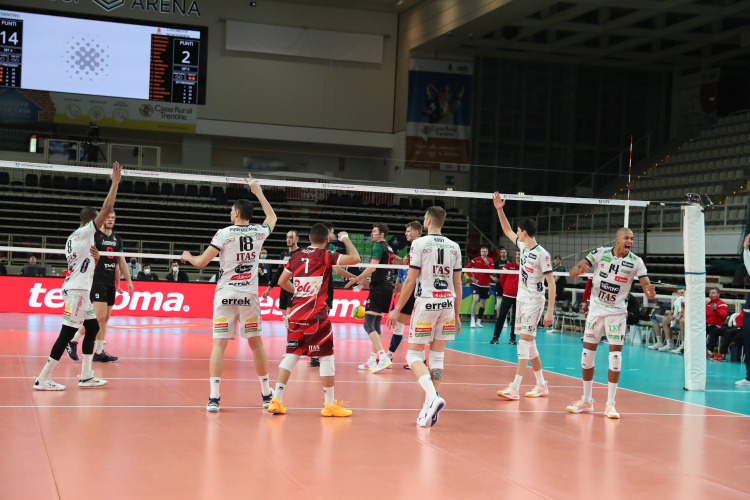 Some notes and statistical curiosities of Trentino Volley at the end of its twenty-first season of activity.

122. These are the minutes of duration that strangely have marked both the first and the last official match of the 2020/21 season of the gialloblù formation, which had debuted by winning at the tie break against Civitanova the first leg of the semifinal of Super Cup and had closed by losing at the fourth set the Final of Champions League with Kedzierzyn-Kozle, taking the same time: two hours and two minutes.

AVERAGE DATA. A match lasted 99 minutes, with 86,5 points scored (of which 8,4 blocks and 6,9 aces) and 77,8 points suffered. These are the average data of Trentino Volley, which are calculated from the forty-six official matches played during the season.

NEVER THE HOME KO AT THE TIE BREAK. In the vast range of results achieved during this season, Itas Trentino found itself in dealing with every type of score, apart from one: the home defeat by 2-3. The most frequent score was the home success by 3-0, which contributed in an important way to make the victory for three sets by far the one that occurred the most times (17 out of 33 obtained overall, taking into account also the five away).

RECORD STREAKS. Two winning streaks are being written in the book of the corporate records during the 2020/21 season. Sixteen consecutive victories, obtained between the first December 2020 and 27 January 2021 (third streak ever), and thirteenth affirmations in a row in the European Cups, conquered between 13 February 2020 and 24 March 2021 (second streak ever regarding the CEV competitions).

ALL KO EXCEPT KEDZIERZYN-KOZLE. During the 2020/21 season, Trentino Volley has obtained the success at least one time against all the opponents that it has faced, except Kedzierzyn-Kozle – the only team that, by winning the Final of 2021 CEV Champions League on the first of May, didn’t allow the gialloblù team to have the re-match. Piacenza was the opponent that has suffered the major numbers of defeats (4 out of 4 matches played), followed closely by Civitanova (3 out of 8).

LISINAC IN TOP TWENTY. With 41 attendances during this season, Srecko Lisinac entered in the top 20 of the players of Trentino Volley with the major number of official matches played, removing from this position his friend Uros Kovacevic, who stopped in 2020 at 113 attendances, and passed over by Liske with 116 attendances. The absolute record holders remain Birarelli and Colaci (345), whom Giannelli now sees thirty matches away (315). This season, the Serbian middle blocker and the captain obtained respectively the fifteenth and sixteenth place in the "all time" ranking of the strikers, with 1,097 and 1,092 points.

14 MINUTES. It’s how long the shortest set of the 2020/21 season lasted, played on the first December at the BLM Group Arena at the tie break (then won by 15-2) by Trentino Itas against the Russians of Novosibirsk. That partial is also the quickest ever played by Trentino Volley in its history.