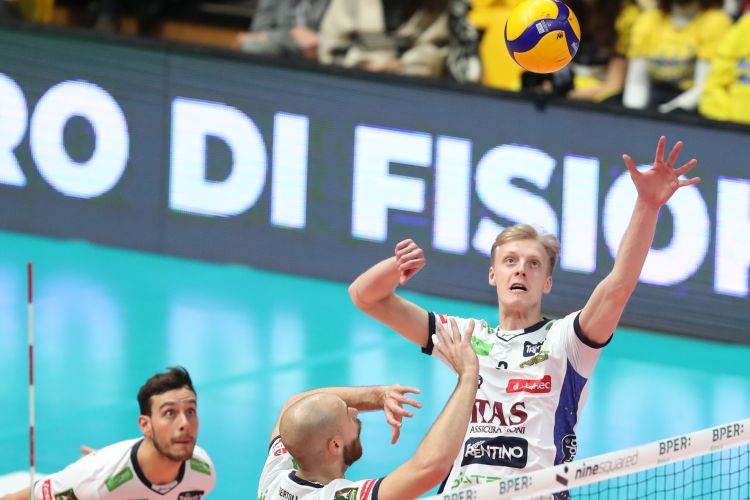 SuperLega Credem Banca 2021/22 is again on field for a midweek round of regular season, which is scheduled on 23 and 24 November. On this occasion, Itas Trentino is on stage in Puglia to face Gioiella Prisma at the PalaMazzola in Taranto in the eighth round. The start is at 20.30 of Wednesday: live on Radio Dolomiti and live streaming on OTT Volleyball World Tv.
HERE ITAS TRENTINO The yellow-blue formation wants to turn page regarding the setback in Modena of Sunday evening, and to do so it can count on the recovery of the Captain Matey Kaziyski. The sprain of the right foot suffered in the finishing training in Emilia turned out to be a minor one: the Bulgarian spiker will be available for the one that, together with the one in Vibo Valentia, is the longest trip in the yellow-blue championship and represents the last match in SuperLega before the appointments in Champions League and in the World Cup per Clubs.
“In Modena we have played a match that, for the second time in this regular season, didn’t give us points for the ranking: obviously we didn’t like this, even though we showed interesting cues during the match. So, we want to return running, keeping the right attitude that we have had on the field, also at the PalaPanini – said the coach of Trentino Volley Angelo Lorenzetti at the eve - . We will play against a team like Taranto that has a lot of talent scattered on the field and has shown it in the several matches played so far. It’s led by an expert coach who has made it confirm the expectations that has had at the eve of the championship: so, a difficult task awaits us”.
The coach of Trento has again to do without Podrascanin (still in quarantine due to a familiar member tested positive for Covid) and will complete the preparation at the appointment with today training during lunchtime at the BLM Group Arena. Immediately after, the team will leave for Puglia with the direct flight Verona-Bari. The one in Taranto is going to be the twelfth official match of the season, the 903rd of the yellow-blue history.
THE OPPONENTS For Gioiella Prima Taranto, the return, eleven seasons later, to the biggest series has been so far characterized by two wins in six matches for a total of seven points in its own raking. Conquered on the first try the promotion in SuperLega after its refoundation, Puglia has created a competitive team that, under the expert coaching of Vincenzo Di Pinto, has been immediately able to find the right rhythm to go towards salvation, the declared seasonal goal. The roster of Taranto can count on many experienced players like the setter Falaschi, the opposite spiker Sabbi, the spikers Joao Rafael and Randazzo, the middle blocker Alletti, and other elements who make the desire to establish themselves at high levels one of their strengths, like the libero Laurenzano and the middle blocker Di Martino. In the team there is also room for the Australian setter Dosanjh (on the team from half of November), the World Champion Under 21 Stefani, opposite spiker and teammate of Michieletto in the national team. So far, Taranto has won only one time at home (by 3-0 on Padova), preceded by two defeats in four sets with Vibo Valentia and Perugia.
PREVIOUS MATCHES The match between Prima Taranto and Trentino Volley returns on field after almost twelve years since the last time. Between 2000 and 2010, the two Companies faced each other fourteen times, exclusively in matches valid for the regular season of the championship at that time of Serie A1. The report is perfectly balanced (7-7), with Itas Trentino that has won four of the six most recent matches, including the most recent one played at the PalaMazzola on 24 January 2010 and won by 3-0. At that time, in the yellow-blue team the Captain was Matey Kaziyski, who in that circumstance scored 14 points. At home of Taranto, the yellow-blue Company has won only one of the other six played matches, conquering the PalaFiom (another arena of the city) by 3-1 on 15 March 2008. In all other cases, only defeats arrived: two by 0-3, one by 0-1, and two by 2-3.
THE REFEREES The match will be directed by Maurizio Canessa (from Bari) and Fabio Bassan (from Brescia), both in Serie A from 2009. Canessa, at his third seasonal match in SuperLega, is the only one who has previous refereeings with Trentino Volley: the latest one is in Vibo Valentia with the success in three sets of last 17 October. For Bassan, this is the first match in regular season 2021/22 and the first refereeing with Trentino Volley.
RADIO, INTERNET, AND TV The match will have a full live coverage by Radio Dolomiti, network partner of Trentino Volley. The frequencies can be found on www.radiodolomiti.com, where it’s possible to listen to the radio commentary in streaming.
There is also the live streaming on OTT "Volleyball World Tv" (paid service). For more information about the service: www.welcome.volleyballworld.tv/faq-it.
On TV, the recap of the match will be broadcasted on Friday 26th November at 16 on RTTR - tv partner of Trentino Volley.
On Internet, the point-by-point updates will be made by the website of Lega Pallavolo Serie A (www.legavolley.it), by www.trentinovolley.it, and by the yellow-blue Social Networks (www.trentinovolley.it/facebook and www.trentinovolley.it/twitter).