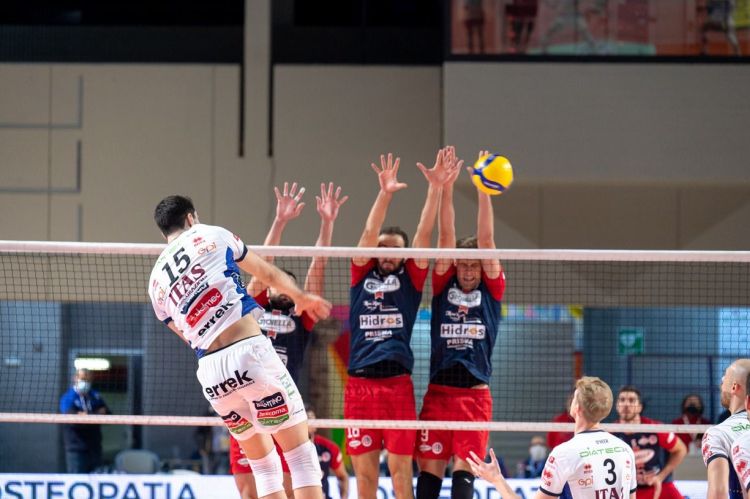 Itas Trentino closes the first part of its regular season of SuperLega Credem Banca 2021/22 with  three points victoryin Taranto. On the shores of the Ionian Sea this evening, the yellow-blue team won 3-1 against the hosts of Gioiella Prisma in the match valid for the eighth round of the regular season SuperLega Credem Banca 2021/22, the last one before the international commitments (for three weeks Trentino Volley will be busy first with the Champions League in Perugia and then with the World Club Championship 2021 in Brazil.
The return to PalaMazzola eleven years after the last previous match saw Trento get off to a rocket start, suffering the comeback of the opponents in the final of the first set (however won in a sprint) and the second partial (lost in the advantages) and then controlling more effectively the last part of the match, thanks to the larger success in the third and fourth fraction. The three-setters module rewarded once again Lorenzetti's confidence: Kaziyski (18 points with a block and three aces), Michieletto (16 points despite a few too many pauses in the second period) and especially Lavia (authentic mvp of the match with 22 points, 58% at the net and four blocks) gave the yellow-blue team the necessary support to take home the entire stake and continue to be in the top zone of the rankings thanks to 22 points in 11 played.

Here is the summary of the match valid for the eighth day of the regular season of SuperLega Credem Banca 2021/22 played tonight at PalaMazzola in Taranto.