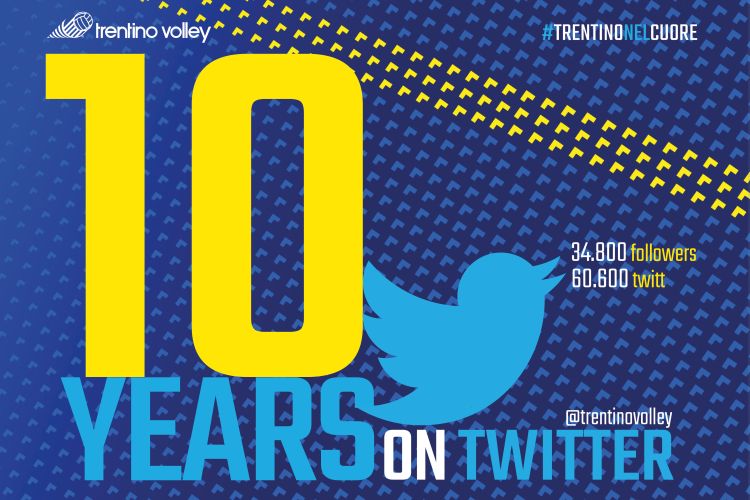 Birthday in double-digit, with the increasingly important numbers for Trentino Volley’s official Twitter profile. The second historic yellow-blue Social Network, that was used by the club after Facebook and even before Instagram, has cut the ribbon of ten years of activity (it was officially created on 1 January 2012) and has proved to enjoy of a great appeal: the followers have increased of 1.055 units in the last twelve months, reaching 34.810 people. This is the highest number of all the time for the Italian Volleyball club (men and women) on this kind of platform. The published twits have increased along with the users and now they have passed the 60.600, with an average of 16,6 a day.
The official profile of Trentino Volley (that the users can find it typing “@trentinovolley”) has been offering for ten years daily updates of the team’s activity, the youth sector and everything that concerns the Society with curiosities, statistical datas, pre-sales and useful information.
The information given through this kind of Social Network is now more complete, intuitive and detailed thanks to the doubling of the letters available for each twit by the microblogging in 2018 (140 to 280) and thanks to the increasingly use of emoticons.
Trentino Volley is the first Italian Volleyball Club (men and women) to have ever obtained the Twitter account check: a unique signal that certifies the quality of the contents of every “twits”.