Morning in Appiano Gentile for Alessandro Michieletto: guest of Inter 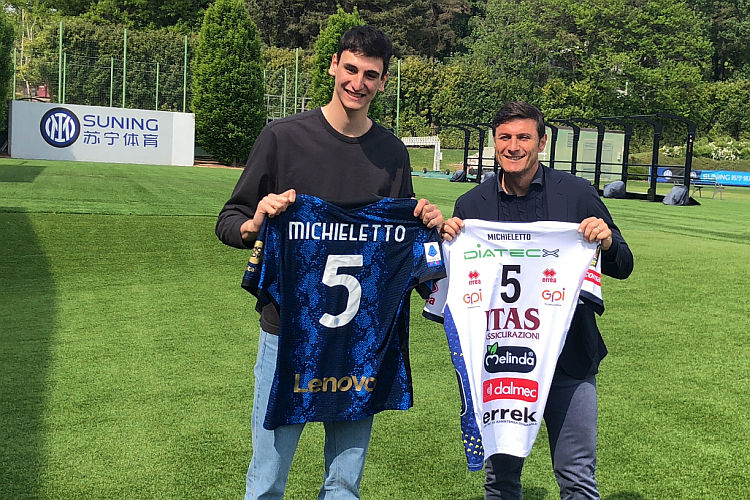 An entire morning at Pinetina to watch live his favourite team training for the final rush of Serie A Championship and stay in close contact with the black-blue champions: it’s the present that Alessandro Michieletto received today from Internazionale FC.
The hitter-spiker took advantage of the half day off given by Lorenzetti to reach the Sport Centre Suning Training Centre “Angelo Moratti” in Appiano Gentile (province of Como) at 10, as a guest of the current Italian Champions football club, of which he has always been a fan.
Alessandro watched courtside the training of his idols, he met Javier Zanetti (who received the shirt number 5 of Trentino Volley as a present from Alessandro, as he got a customised black-blue shirt) and two big volleyballs enthusiastic like Ivan Perisic and Nicolò Barella, with whom he was in touch thanks to the physiotherapist Davide Lama, who has been part of the medical staff of Inter for two years, but had worked for Trento from 2012 to 2017.
“It was an amazing experience, that I was waiting to live it in a long time but I had never had the time due to our agenda – explained Alessandro, interviewed also by Inter Tv - . I couldn’t wait to watch a live match in Meazza stadium; I’ve already been there but it will be an even greater emotion as a guest of Inter. Thanks all and go Inter!”