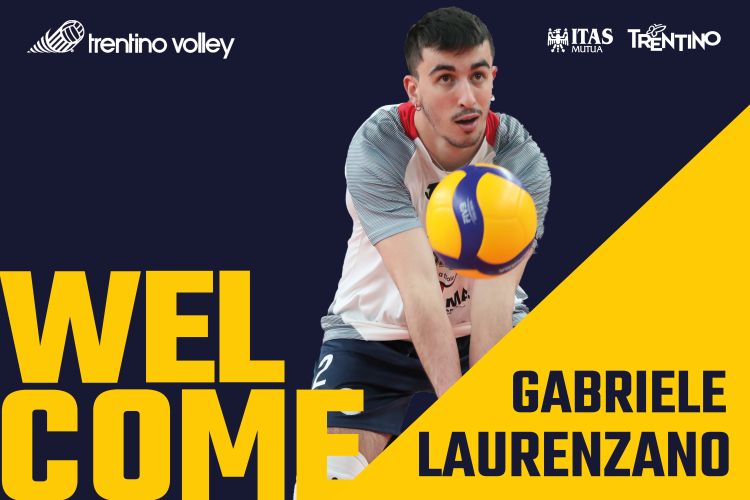 Young, talented, determined and wearing a lot of desire to become "great." That's the portrait of Gabriele Laurenzano but, on closer inspection, it could also be a perfect fit for that of the entire roster that Trentino Volleyball is assembling ahead of the 2022/23 season.
In the roster at Angelo Lorenzetti's disposal, there will again be room for an Italian starting libero; unlike in the recent past, for the next three seasons the via Trener club has chosen a national prospect profile for this fundamental role. Laurenzano is in fact a second-line specialist of just nineteen years old (turned 12 last June), who has quickly arrived at the highest level thanks to already highly developed talents.
In his first experience in the SuperLega, completed in April with the jersey of Taranto, Gabriele was able to immediately put himself in the spotlight, showing himself to be reliable in reception (fourth receiver in the league by weighted average) and very well prepared in defense. All that was needed to convince Trentino Volley to invest in him and entrust him with the red jersey branded "Supermarkets Poli". Grown up in the nursery of Castellana Grotte (with which he won two youth championships, the last one a few days ago in the Under 19 category), Laurenzano has long been on the youth national team roster, with which he has already won the European Pre-Junior 2020 title, embellished by the award as best libero. As soon as he finishes his high school exams (which he started just today), he will rejoin the Italy Under-20 group with which he worked until last week in Zocca (Modena).
"In welcoming Gabriele I want to send a hug to Julian Zenger," said Trentino Volleyball coach Angelo Lorenzetti ". Together with him we had a positive year, but we knew long ago that for the next one we would turn to an Italian profile for this role and Laurenzano's name was first on the list. The club was good at securing him, Gabriele was in fact appetite by many clubs. We chose him because he is talented and because we want to insert an important and definitive piece in this role. Laurenzano is a young guy and all this means that that talent shown so far will have to direct him properly to fully find his style. Trento will be a time of growth for him, not only on a technical and tactical level but also on a relational level, because fitting in and being a protagonist in this club is a different experience from the ones he has experienced so far. We are eager to see him immersed in this reality."
Laurenzano will wear jersey number 13, which in the past in Trentino Volleyball has already been on the shoulders of an important Italian libero like Massimo Colaci.