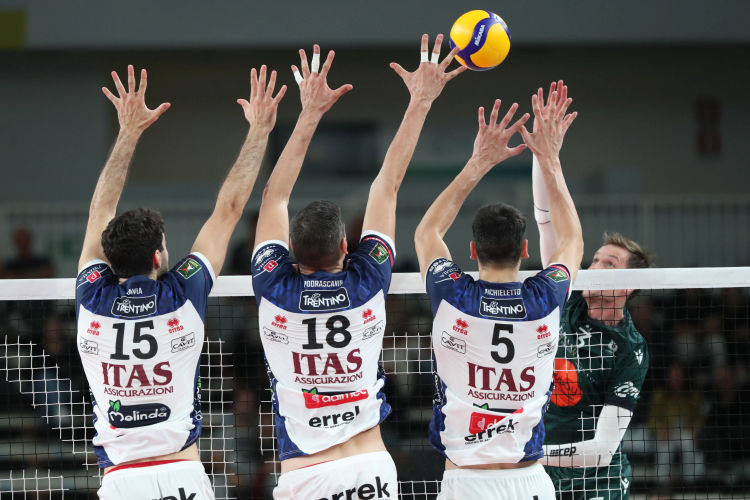 Match report. For the first official match of the season, Angelo Lorenzetti inserted Sbertoli as setter, Lavia as opposite, Michieletto and Kaziyski as hitters, Lisinac and Podrascanin as middle-blockers, Laurenzano as libero. Paolo Montagnani, Siena's coach, must do without Ricci (in the stands) responds with Finoli at the dribble, Pinali as opposite (fresh former on duty, applauded in the pre-game when the club honored him with a plaque), Petric and dunks, Biglino and Mazzone as middle-blockers, Bonami as libero.
The best impact comes from the guests, who, with Pinali and Petric, immediately fly on 1-4 and 2-6 outside, before Kaziyski  does not immediately recompose the tear (5-6) with a good rotation on serve. Tie score already arrives at 7, with a Podrascanin first half; from there on, the two teams fight point to point until 12-12, when a Kaziyski slash and a Lisinac block on Van Garderen offer the first real yellow-blue cue of the evening (14-12, Tuscan time out). After the break, it is still Itas Trentino that rules the roost at the break point, thanks to its constant effectiveness at the block, with Lisinac becoming absolute master of the net and inspiring the decisive rush to close ahead in the first set (19-13). The change of court came on 25-16, after Kaziyski put on a show from the nine-meter line.
Emma Villas Aubay tried again in the second set, risking a sharp serve and a good moment at the net by Pinali that made the outside score 5-7; Trento immediately replied (9-9) with the usual Kaziyski. We go 12-12 again, but this time the balance is not quickly composed; it takes a couple of functional ideas from Michieletto (counterattack and block) to secure +3 at 18-15.
Montagnani calls the time out, but after that, his team is disunited and foul at the service, which allows the hosts to sleep soundly (21-17 and 25-21), also thanks to the contribution of Džavoronok, who signs the first yellow-blue team’s point and close the set.
The script does not change even in the third set, the first bars of which see  the guests effective at the net and very well prepared in defense again. Thanks to these weapons Siena holds the court well (5-6 and 10-12). Lavia's contribution grows and Michieletto is on the ball; the hosts catch their opponents at 14-14, before Siena with former Van Garderen offers another acceleration (16-18, Lorenzetti's first time out of the season). Itas Trentino gives up a little bit (17-21), tries to get back on the right track (21-22) with Džavoronok on serve, but at the line is pierced twice by Pinali: 23-25 and 2-1.
In the fourth set, the yellow-blue team re-enters the court in a different way and it immediately cornered the Tuscans (6-4 and 10-6), hitting hard with the serve. Siena tried to get back into the match until 12-10, then it was Laurenzano's defenses and Kaziyski's attacks (and aces) that secured the result (14-10 and 18-11). The first three points of the season materialized on 25-17, with Cavuto and Pace also on the court to take the applause of the audience.