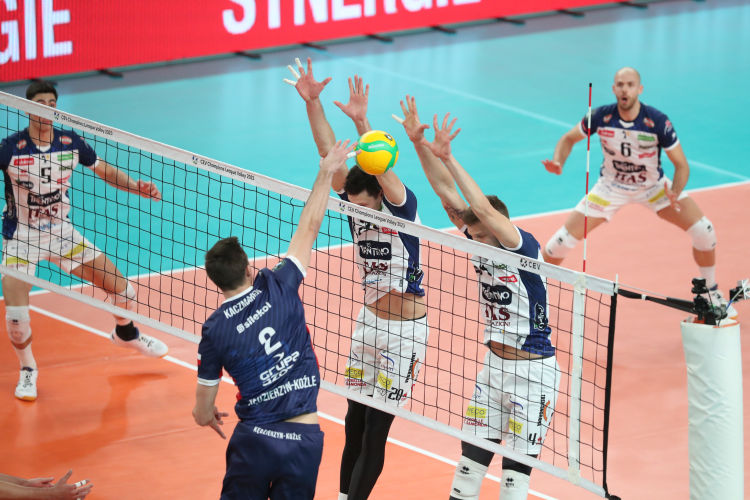 Match report. Trentino Itas is back in front of their home fans three days after the match against Milan with the same starting six: Sbertoli as setter, Kaziyski as opposite, Lavia and Michieletto as hitters, Lisinac and Podrascanin as middle-blockers, Laurenzano as libero. Grupa Azoty responded with Janusz as setter, Kaczmarek as opposite, Sliwka and Staszewski as setter, Kalembka and Pashitskii as middle blockers, Shoji as libero. The hosts got off to a fast start, with Michieletto serving (also a direct ace) immediately making the difference, forcing the Poles into many direct errors at net and simple rebuilds in position 4 with Lavia (1-1 to 6-1). Sammelvuo, the guests’ coach, interrupts the game, but at the end of the time-out, it is still Trento who has the upper hand with Kaziyski (8-2 and 10-4).
Kedzierzyn-Kozle then tried to respond for the first time with some good actions from Sliwka and Kaczmarek (10-7 and 11-9) but Lorenzetti called time-out and his team rested on the effectiveness at the net of Michieletto and Lisinac (14-11). Grupa Azoty goes up again with Sliwka (17-16), before finally surrendering under Lavia (20-16 ace) and Michieletto (attack and ace for 24-19). The internal 1-0 lead came on 25-20, thanks to a hitting error by the opposing team.
After the change of ends, Kedzierzyn-Kozle showed a different attitude, especially at serve and in counterattack, with Sliwka hurting Trentino’s second line. Within a few exchanges it was immediately 3-6 and then 4-8, a score that advised the yellow-blue coach to call a time-out. Lorenzetti had to spend the second time-out shortly after at 6-12, after Kalembka's block had repelled Kaziyski and Lisinac's attacks. The captain gave way to Džavoronok, but Trentino Itas did not recover the gap (9-14 and 11-19), also because Sliwka and Kalembka's block continued to make the difference and led their teammates to 15-25, which was worth the tie in the set count.
The third partial does not start well for the hosts, who, at 1-2, have to replace Lavia with Džavoronok, after the Calabrian hitter injured himself by bumping against the referee’s chair. The Polish team takes advantage of the hosts’ confusion and flies to 1-4, but it has to deal with Trento’s comeback (5-5). Then, the competition becomes faster and faster and blow to blow (8-8 and 11-11), with the two teams extremely excited in defence and hit hard each ball, taking turns on the first place of the match. Shoji’s double hit allowed Trentino’s comeback (13-11), which is more and more effective when Sliwka makes a pipe go out and Kaziyski makes a break point (16-12). Groupa Azoty attempts a comeback (18-16 and 21-20), also thanks to an unlucky defensive forearm pass, which has been valued incorrectly by the hosts. In the final rush we have Kaczmarek who scored at service (21-24), Nelli, back on court again at the place of Kaziyski, who blocked Sliwka (23-22) and Kaczmarek attacking out from the place 4 for a score of 26-24, taking Trento to 2-1.
Excited from the success in the previous set, Trentino Itas takes off in the fourth set, too (4-1) and Michieletto hinders the opponent’s attempt of a comeback (from 5-3 to 10-6). In the middle of the court, Kaziyski and Džavoronok’s attacks defend the score advantage (15-11), before Kalembka hindered in turn the home defence, gaining the tie score at 15 with an ace. The yellow-blue team replies with Donovan and Matey (19-17) and defends the +2 until 20-18, when Lavia re-entered in the game and suffers Janusz’s ace (20-20). The captain (23-21) and the Czech hitter (25-23) make a sprint.