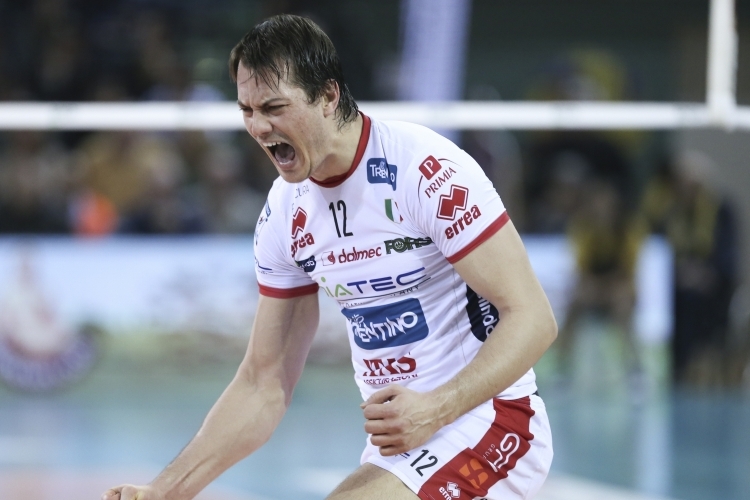 Ahead of the next season Trentino Volley market gets another important achievement. After the recruitment of the Slovenian spiker Klemen Cebulij and the Cuban Luis Sosa Sierra, Itas has signed an agreement (annual) for the return of Mitar Djuric. It will be the Greek 30 years-old, who comes from Sarajevo, to serve as an alternative to Luca Vettori as opposite in the 2019/20 roster. The player comes back to Trento three years away from the last time, in order to play in the italian championship offering a contribution at a team which has always been very important for him, thanks to the several victories achieved together. Over his 133 games with Trentino Volley, characterised by 1401 points, Mitar Djuric has indeed achieved, always as protagonist, 7 trophies: two World Club Cups, 2 championships, one italian Supercoppa and two italian Cups.
Between 2011 and 2012 in Itas he has been a central, whereas between 2015 and 2016, after a period in Turkey and Corea, has been an opposite, contributing to the vicotry of the 4th italian title ever and almost achieving, with his peers, the claorous success in Champions League in the Final Four in Cracow of the next season. He comes back to Trento with a high motivation and enthusiastic after the experience in Verona and the last season, which was experienced in Salonicco /Greece) and Poitiers (France).
“Finding Djuric in Itas again is a great pleasure – explains President Diego Mosna – . I clearly remember the contribution he has offered as an opponent in the last seasons, where he played with us, and how bigger was his contribution in the finals played and won by our team“.
“It wasn’t an easy task to find a suitable substitute for Nelli, for everything he did for the team last season - underlined coach Angelo Lorenzetti - . We started attentively looking for one and found the right profile in Djuric, the best option to fill the gap left open, even if he’s a foreign player and will require a substitution for him to play in the Italian league. At the same time we know his worth, his technical talent, once he’s fully recovered. I believe his signing is a great opportunity for both us and him, for all the great things he did in the past with Trentino Volley”.
Djuric chose jersey number 12, the same he had in three of the four seasons he played with Trentino Volley.