Itas Trentino-Cucine Lube Civitanova 3-2 in Mirandola. Report of the match 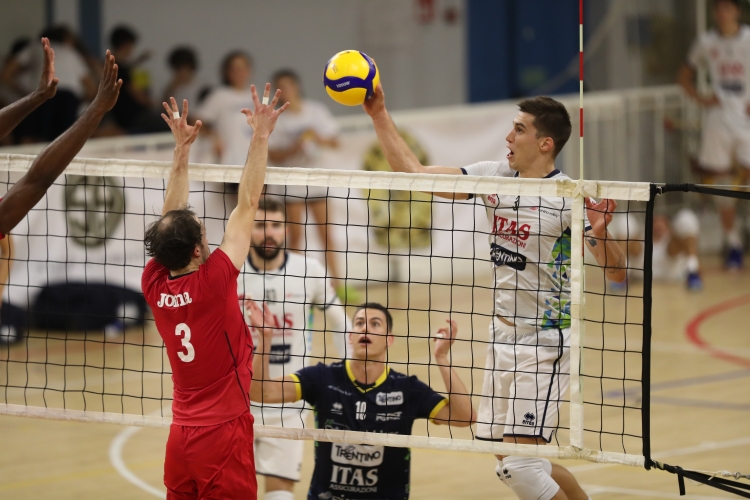 Report of the match. Angelo Lorenzetti confirms the formation seen in the field the day before against Verona: Giannelli as setter, Vettori as opposite, Cebulj and Kovacevic as spiker, Codarin and Lisinac as middle-blocker, Grebennikov as libero. On the other hand, Cucine Lube, still without Bruno, Leal and Anzani, replies with D’Hulst as setter, Rychlicki as opposite, Juantorena and Kovar as spikers, Diamantini and simon as middle-blocker, Marchisio as libero. The yellow-blue’s beginning is extraordinary: Ready go. It is immediately 5-0 thanks to Giannelli and the serve of Vettori. The time out of the opponents tries to solve the problems of Lube, which in fact then improves (8-6) with the Rychlicki’s serve and the Juantorena’s attack. Tie arrives at eleven points, with the red-and-white team improving thanks to the service of the Italian-Cuban spiker. It is always this fundamental that hurts Itas Trentino, which also suffers from the ace of the opposite from Luxembourg. Trento reacts with Vettori (17-18) and Kovacevic, reaching 21-21. The final rush is exciting: Civitanova cancels a set ball to the opponents and scores (25-27) with a Simon’s ace. Trento reacts at the beginning of the second set (6-3); Lube immediately reacts (10-8) with the usual Rychlicki. In this case, however, Lorenzetti's team is good at receiving and in the side out phase, thus maintaining control of the play (16-13, 21-18), also because Cebulj and Kovacevic are very efficient. The end of the set is at 25-22 with a wild Vettori in the serve phase.
Itas Trentino starts the third set very well, with a wild yellow-blue opposite on the net and a block-defence system that offer several occasion of break point (5-3, 9-5). Thanks to the serves of Simon, Lube is back on top (9-10), but it is exceeded again due to Vettori (12-10). In the defence phase, the World Champions work very well and manage to stay ahead (17-15). At 19-19 Lorenzetti interrupts the game and, once the game resumes, a block of Giannelli scores +2 (23-21), which Kovacevic defends until 25-23. In the fourth set Cucine Lube comes back strongly, starting to immediately put pressure on the opponents in serve and block phase (3-5, 6-9, 5-11). Lorenzetti changes Sosa Sierra with Kovacevic and then Daldello with Giannelli at 5-13; the changes continue also with Michieletto instead of Cebulj but the situation does not improve and Lube advances (9-19), arriving at the tiebreak. The fifth set sees Itas Trentino back on the field with the formation of the start of the match. Itas Trentino tries to score immediately (3-1, 7-5), helped by a remarkable defense. Lisinac defends the advantage (10-8), Vettori imitates him (12-10); the 3-2 victory arrives at 15-13 with a Giannelli’s attack.