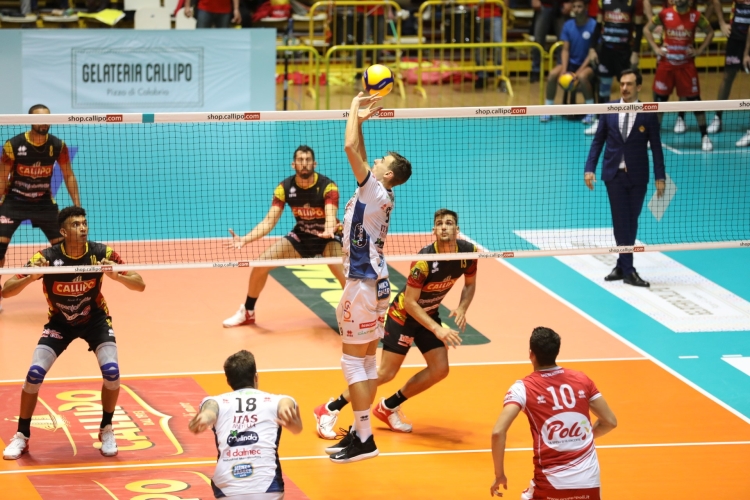 Game report. At PalaCalafiore, Itas Trentino can rely on the whole team, allowing Angelo Lorenzetti to only have problems of abundance and to initially line-up Giannelli as setter, Vettori as opposite spiker, Kovacevic and Cebulj on the sides, Lisinac and Candellaro in the middle, Grebennikov as libero. For its first home match of the season, Tuna Callipo Calabria lines up Baranowicz as setter, Drame Neto as opposite spiker, Defalco and Carle as spikers, Mengozzi and Chinenyeze in the middle and Rizzo as libero. The beginning is positively marked by the guests, who take advantage of two consecutive errors of the rival opposite spiker to get up by 2 (3-1), a margin that does not remain intact (Vibo already equals 6-6) but that is quickly restored thanks to the attacks of Cebulj and another mistake of Drame Neto (9-7). Lisinac's blocks (two consecutive ones) take the team to its largest lead (11-7, time out called by Cichello) and force the home team to alternate its opposite spiker (Hirsch comes in), but the music doesn't change, on the contrary it gets better for Trento that gets up to 7 (14-7). The final part of the set is therefore absolutely smooth for the World Champions, who can manage the considerable lead (19-12) and quickly square accounts with it, with a score of 25-16, without experiencing any particular comeback from the home team. Lisinac's performance, who scored five winning blocks, is to point out in this first set. In the second set, Cichello keeps Hirsch on the court and Tuna Callipo seems to find immediate benefit from it; the German spiker scores the points that bring the Calabrian team to 3-4, then Kovacevic and Vettori's mistakes give a +3 lead (5-8) to the Giallorossi. The Itas Trentino loses further ground (6-10 and then 8-13) but with Cebulj at service (even an ace) it is brought back close again (12-14); Vibo Valentia smells the danger and after the time out it re-establishes a considerable lead thanks to Carle (13-17). It's the decisive break, because afterwards the away team gets closer again (20-23), but without being able to draw, also because Hirsch regularly and successfully attacks our defensive line, making useless the substitutions during the set of Cebulj (Russell comes in) and Vettori (Djuric comes in). Now the Score is 21-25, with a change of field with De falco, the strong attacker.
During the third set Itas Trentino is again a well-functioning team, both in the side-out phase and in the Break Point phase. The Gialloblù take the reins of the game, and thanks to an efficient service and a strong attack, from 8-5 points gets to 14-8. The set’s final score is 25-18, that sees Itas Trentino as a winner.
The fourth set is a much more balanced one (4-4, 11-11), and the teams keep on switching the set control. Thanks to the forceful Kovacevic who breaks Baranowicz block, the balanced game (19-19) changes: the Lisinac slash makes Trento gain points (22-19); Vettori (25-22) scores the final point.