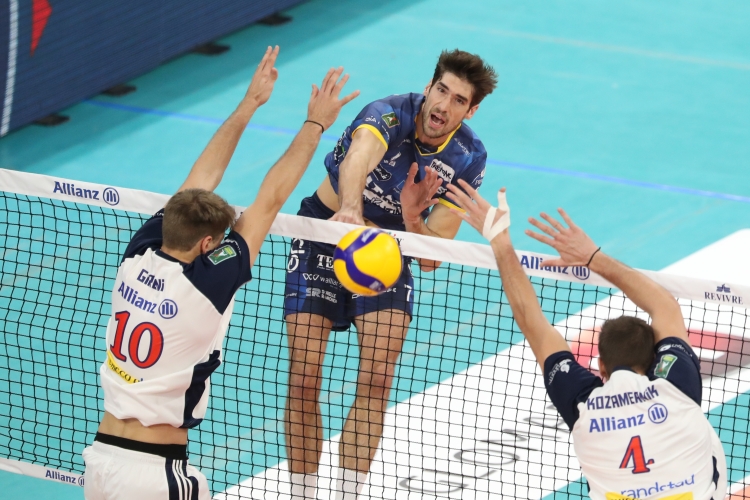 Report of the match. Itas Trentino arrives in Milan with no formation problems. Lorenzetti has a wide choice, especially in attack. Lorenzetti puts Giannelli as setter, Vettori as opposite, Kovacevic and Cebulj as spikers, Lisinac and Candellaro as middle-blocker, Grebennikov as libero. Allianz Milano replies with Sbertoli as setter, Abdel-Aziz as opposite, Gironi and Petric as spikers, Clevenot and Kozamernik as middle-blockers, Pesaresi as libero. It is a very tense beginning for Trento because Milan works very well with Abdel-Aziz (0-3 2-6) and the yellow-blue team struggle in side-out phase.  Lorenzetti had already spent his time out in the first part of the match and he gets, only partially, the desired result (9-12). Finally, Milan wins quickly in the first set (18-25) thanks to the services of Petric and Kozamernik. In the second set, the yellow-blue team takes the field with another attitude, fighting point by point with the opponents (6-6, 9-9). Lorenzetti after a few minutes has already changed Russell with Cebulj; it is thanks to the American player that Trento scores a few more points, in fact it performs a comeback up to 12-13 forcing Piazza to spend a time out. At the resumption of the game, Allianz Milano returns to serve very well from the nine-meter line (15-19). Itas Trentino is now up against a wall and returns to play as it knows how to do, reaching a tie at 23-23 thanks to Kovacevic and above all to Russell himself. Trento wins the second set (26 to 24).
On the third set the World Champions start really well (6-3, 9-4). Milan replies with Abdel-Aziz  until 9-8 (time out Lorenzetti);  Russell manages to revive the team (15-12). The Allianz fights until 19-17, then it loses temporarily Abdel-Aziz because of a ankle injury and definitively left  the opponents flying at 2-1 (25-18), also thanks to two consecutive aces of Vettori.
In the fourth set the Dutch opposite returns in the field, but it is always the Itas Trentino to set the pace taking advantage of some mistakes by the hosts (5-3). Piazza inserts Weber again and Trento doesn’t give up (9-7, 12-7) and it keeps fighting (from 20-14 to 20-17 ). The 3-1 final arrives at 25-21: three golden points with a great proof of character.