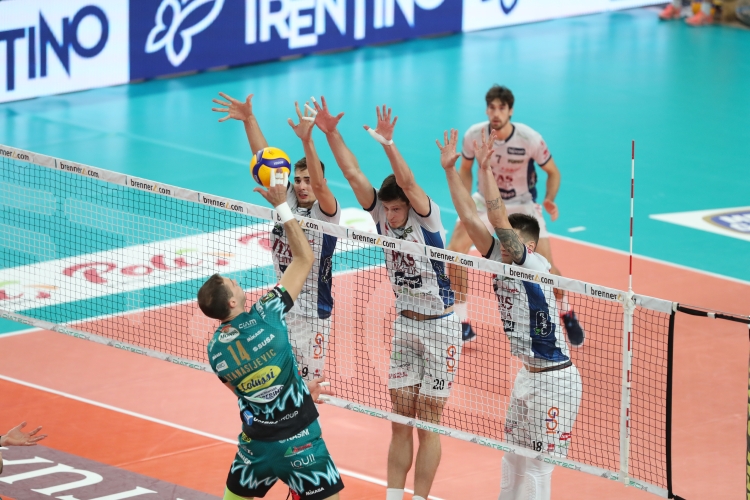 Match report. Lorenzetti pulls up the ex player Russell, but decides not to make him part of the starting six, which is the same that won 3-1 in Latina for days ago: Giannelli as the setter, Vettori the opposite hitter, Kovacevic and Cebulj as the spikers, lisinac and Candellaro the middle hitters and Grebennikov as the libero. Sir Safety Conad enters the BLM Group Arena with De Cecco as the setter, Atanasijevic the opposite hitter, Lanza and Leon in area 4, Russo and Podrascanin as the middle hitters and Colaci the libero. The beginning of the match is balanced, with the two teams managing well the side-out phase until the successful block of Candellaro on Podrascanin, followed by Lisinac ace (from 5-5 to 8-5). Heynen’s time out, shakes the opponents, who rapidly fill the gap reaching the ninth point, before starting to increase the pace (9-10, Vettori’s mistake by attacking). Lorenzetti’s time out does not help much, because Vettori makes another mistake and the opponents increase the gap (10-13). Trento tries to react with Lisinac, but Perugia does not leave much room (14-17) but actually increases the pace with two aces of Leon, 15-21. At the end Itas Trentino tries to bridge distances, making use of one of the opponent’s rare mistakes (19-22), but it is too late for hopes and set is won 21-25 by Perugia, thanks to one attack of the Cuban player.
The match seems to be balanced again, at the beginning of the second set, with the World Champions keeping the pace in both game phases (5-5, 9-8, 11-11), also thanks to Vettori and Cebulj’s creativity, Cebulj scores also one ace. But Russo’s boost in the serving phase together with Atanasijevic increases the gap (14-16) and forces Lorenzetti to ask for a time out. As they take field again, the team is completely changed, scoring from the second line with Candellaro and Cebulj, and with some fierce attacks of Vettori (20-18). Perugia is cornered (22-18, 25-20), overwhelmed by the firm scoring of the homeowners.
Sir Safety Conad reacts at the beginning of the third set; with Leon serving and Atanasijevic at the net it gets to 2-4 and then 4-7, forcing Trento to ask for a time out. When the match resumes, the gap increases, because Itas struggles in attack and Perugia takes advantage of it getting to +5 (7-12). Itas Trentino does not give in and tries to come back with Vettori (10-13), but it doesn’t last, because the guests reconquer the field with Lanza’s ace and Leon’s block on Vettori himself (12-18). Lorenzetti sends in Russell in the place of Cebulj and Trento rises to -3 (16-19) with a scoring serve by Vettori but it’s too late, because then the block devils don’t allow anything (17-22) and get to 1-2 for the guests (19-25).
Itas Trentino tries to perform a comeback in the fourth set with the attacks of Kovacevic and Giannelli’s ace (6-3), but Perugia remains united and obtains a tie (8-8). In the central part Sir Safety gets ahead (10-12, 14-16), making the most of Leon’s attack ability. Lorenzetti sends Russell back in and Trento recovers (19-20), getting to a tie shortly after, thanks to a mistake made by Lanza. Leon determines the final result (23-25).