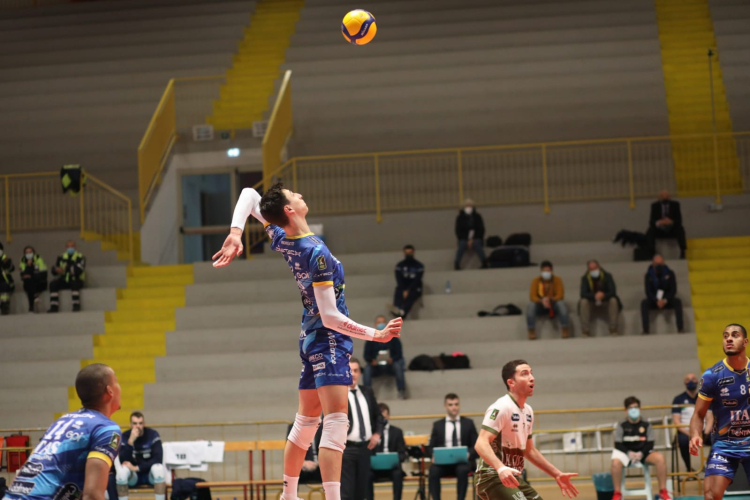 The match report. At the PalaMaiata, the two formations present themselves with only one news compared to the line ups expected to the eve; the starting six of Itas Trentino has Giannelli as setter, Nimir as opposite spiker, Lucarelli and Michieletto spikers, Podrascanin and Lisinac as middle blockers, Rossini libero. Tonno Callipo Calabria has to do without Defalco and responds with Saitta as setter, Drame Neto as opposite spiker, Rossard and Almeida spikers, Cester and Chinenyeze as middle blockers, Rizzo libero. The start of the gialloblù is pounding; at service, Nimir finds immediately two aces and favours the counterattacks of Michieletto and Giannelli (5-1). The time out of Baldovin doesn’t have any effects, because at the restart of the game it is always the guests who command (10-5), with Podrascanin and Lisinac (block and attack) in plain view. On 13-7, the coach of the hosts has already stopped the game for two times, but Trento is unstoppable and doesn’t grant anything to the opponents (16-10, 19-11), with Nimir wild also in attack and Lucarelli who scores at service (two consecutive aces). The change of field arrives on 25-13 (service error of Saitta).
Four consecutive point serves of the Dutch opposite spiker open the second set in a similar way to the first; Baldovin calls a time out already on 4-0, but before having an effect on his team he must wait 10-5. On 10-7 (mistake of Nimir), Itas Trentino restarts with service and counterattack: Michieletto scores two aces and Giannelli scores also at blocking (16-10). The final of the set is all in favour of the gialloblù team, which scores breakpoints in series (20-12) even with Lucarelli and leads to 2-0 already on 25-16.
Tonno Callipo Calabria tries to make a comeback at the start of the third set with Drame Neto (1-4), but the guests tie quickly with Nimir (5-5), and then score the advantage with Lucarelli (8-6, time out of Baldovin). In the central part, Itas Trentino scores again with the Brazilian spiker at service and Podrascanin at blocking (13-9 and 16-11). Vibo tries to comeback with Chinenyeze (two blocks and one attack) until the minus three (19-16), before leaving room to the opponents: 25-20, 3-0 and third place secured.