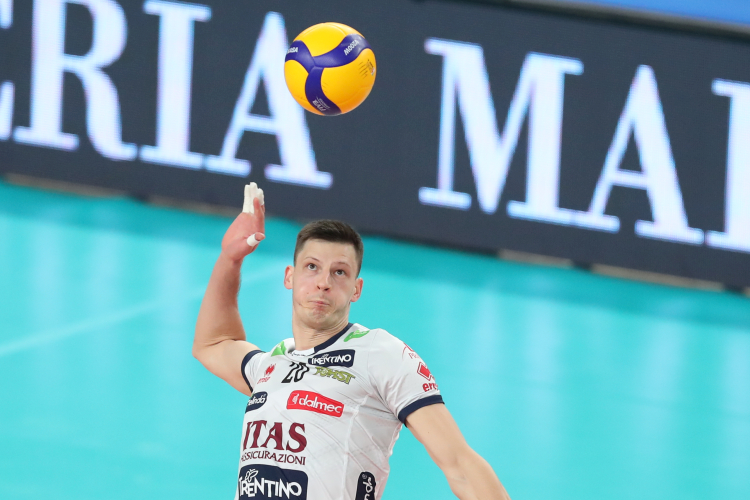 Some statistical curiosities emerged after Sunday's match between Tonno Callipo Calabria Vibo Valentia and Itas Trentino 0-3, a match valid for the twentieth round of SuperLega Credem Banca 2020/21.

FASTEST GIALLO-BLU' MATCH IN REGULAR SEASON 2020/21. The one played at PalaMaiata was the fastest match played by Itas Trentino in the regular season of SuperLega 2020/21 so far, and there are only two rounds left to play. In fact, the 72 minutes of actual play represent the (minimum) seasonal record of duration in the league for the giallo-blù team; the previous record was relative to the match won on 6 January against Milan (recovery of the tenth round), which ended in 75 minutes. The ability to win games quickly is becoming a pleasant habit for Trentino Volley this season; in five cases in the Champions League, Lorenzetti's team took less time than Sunday in Calabria to impose the 3-0: on 29 September with London (67 minutes), two days later with Novi Sad (70 '), on 28 October with Dinamo Mosca (67 '), the day after with Amriswil (70') and at the home match against Friedrichshafen on 3 December (72').

AMAZING PERCENTAGES IN ATTACK IN 2021. The start of the year 2021 has marked an interesting constant regarding the fundamental of the attack for Itas Trentino. In the six matches played up to now, the giallo-blù team have fallen below 50% of the attacking team only on one occasion (with Monza on 10 January - 47%). In all the other five circumstances the numbers on the net were really remarkable: 51% with Perugia, 56% with Milan, 66% with Padua, 63% with Cisterna and 54% on Sunday evening in Vibo.

LISINAC AMONG THE "CENTENARIES". The quarter-final of Del Monte® Coppa Italia 2021, scheduled for Wednesday 27 January at 7 pm at the BLM Group Arena between Itas Trentino and Allianz Milano (single match, live on Radio Dolomiti and Eleven Sports), will also be a particularly important event from a statistical point of view for Srecko Lisinac. On that occasion, the Serbian middle-blocker will join the small group of "giallo-blù centenarians", those who have reached one hundred official appearances with the Trentino Volley jersey; Lisinac counts 45 games played in the 2018/19 season (the one marked by the victory of the Club World Cup and the CEV Cup), 30 in the 2019/20 and 24 in the current one, with an overall score of 939 points (average for match 9.4). He will be only second player of the current squad to reach the triple figure (the first is obviously Captain Giannelli, 298 appearances), the twenty-first in total. Among those player we can see another foreing middle-blocker, the Brazilian Heller, and at the top of the list there are Birarelli and Colaci (345).

MICHIELETTO AND THE ITALIAN CUP QUARTERS WITH MILAN. The quarter-final of the 2020 Italian Cup, played on January 23 against Milan, made him rise to national prominence for the first time; only 369 days later, Alessandro Michieletto is already a great reality of Trentino Volley. The spiker, who grew up in the giallo-blù youth sector, finds the Milanese team in the same phase of the scoreboard in a moment of particularly important form; that of Wednesday evening will in fact be his fourteenth consecutive game as a starter, the thirty-ninth overall in varsity in which he has already scored 180 personal points. "Playing Del Monte Coppa Italia quarter-final is always a great commitment, regardless of the opponent which is on the other side of the net - he declared, presenting the appointment - . Furthermore, we will face a team that is recovering, also thanks to Patry's return to the field and the arrival of Urnaut. I therefore expect a very different match from the one played at the BLM Group Arena just three weeks ago, but we want to reach the Final Four and we will give everything we have to achieve this goal ”.