Introduced Julian Zenger: “In Trento there is everything to grow and do well” 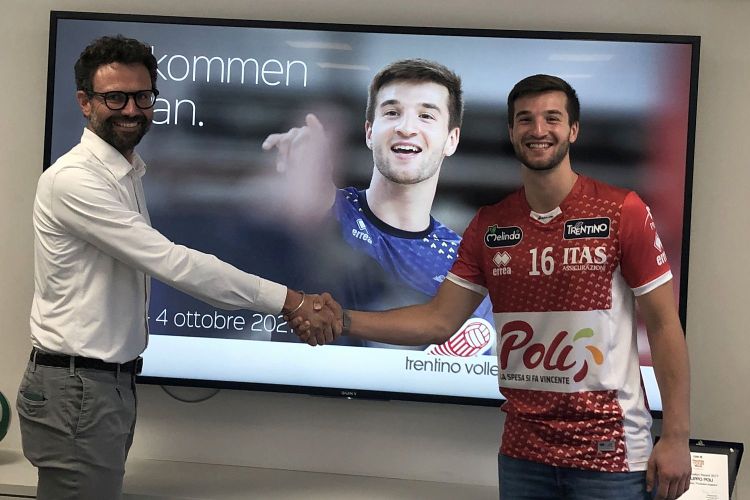 The main hall of the headquarters of Group Poli (the sponsor that will put its brand on his jersey) has been the place of the first official moment of Julian Zenger’s career in Trento. This morning, the new libero of Trentino Volley has met the media in the same place in which, three years before, was introduced Grebennikov, the last foreign player who was the yellow-blue libero and who the same German has revealed to be one of his role models.
“In actual fact, Jenia has revolutionised this role, making it even more important in modern volleyball and showing to everyone how having a great specialist of the second line can make the difference; for me, it’s an honour to wear the jersey that has been worn by him in the recent past – said Julian Zenger - . I’m very happy to play for Trentino Volley, especially in this season in which the Company has decided to rely on many young people who are the same age. Growing, trying to overturn the previsions, and proving to be ambitious is going to be our goal, to pursue together. Outside Germany, this is going to be my first experience in the Italian championship, the most beautiful and difficult in the world. I know that I need to work hard to handle the rhythm, but here in Trento there is everything to do well. I couldn’t ask for anything better”.
During the presentation, it was revealed the jersey that he will wear, from seven years Supermercati Poli put in exclusive its brand on it; Zenger decided to use the number 16 that reminds to fans of Trento of Andrea Bari, a player who has left goods memories and written important pages of history in that role. “The choice of matching our brand to this kind of jersey has proved to be the right one over time and has allowed us to enjoy excellent visibility and to offer a contribution to the world of city sport – explained Mauro Poli, General Affairs Director of Group Poli - . So, we’re happy and proud to continue a partnership that has become longstanding, and we welcome Zenger who, together with the other libero De Angelis, will wear in alternation our two jerseys that we are going to present for this season. Beside the traditional red jersey of Poli, we will propose again also the white-green one with the brand Gusto Contadino”.
“In thanking Group Poli for the closeness that it guarantees and will guarantee us in time, I like to underline how the choice of Zenger in the role of libero is part of the renovation and rejuvenation that the Company has decided to do during the summer – added the General Manager Bruno Da Re - . We liked his profile for a long time; we know that the first season in the Italian championship isn’t easy for a foreign player, but we believe that Julian has what it takes to offer us a big contribution, using the international experience in the latest month in the national team”.