Retrospective, from Lavorato to Kaziyski passing through Birarelli: all the captains 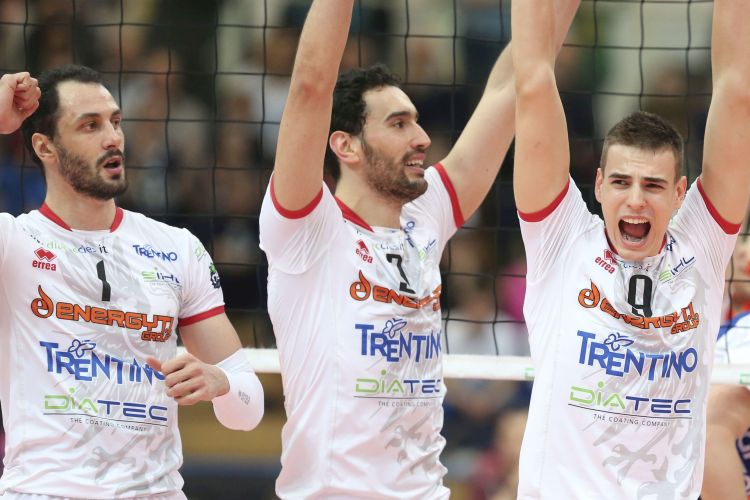 From Francesco Lavorato to Matey Kaziyski passing through Tofoli and Birarelli but also those who, like Burgsthaler, Raphael, or Della Lunga, have worn the band only a few times to substitute the regular absent in a single match. The twenty-one seasons of activity of Trentino Volley take with them stories and statistics of every kind, also in regard to the role of captain: the return of Matey Kaziyski in such role offers the opportunity to dedicate a separate chapter for such argument, reliving curiosities and particular anecdotes.
There were sixteen players in total to fulfil the important role in at least an official match of the history of the yellow-blue Club: the first ever was Francesco Lavorato who, however, due to an injury suffered during the preparation in the summer of 2000, in the first seven days he had to follow the matches against his will from the bench before being able to celebrate the first actual presence. The athlete who has worn the band the major number of times was also the one who had the opportunity to lift for first more trophies (the honour reserved to captains): Matey Kaziyski, 204 matches and 12 trophies till today, with the hope that the figures of both categories can grow. Apart from the Bulgarian spiker, just other three captains were able to lift a cup: two each for Nikola Grbic, Emanuele Birarelli, and Simone Giannelli, the last to do it.
With his twenty-two years, Giannelli was, in addition, the youngest player of the history of the Club to fulfil this role, taking away the record of Lanza, who did it when he was twenty-four; the oldest were Paolo Tofoli and Lorenzo Bernardi (36 years and 8 months), followed by Grbic (36 years and 7 months). Mister Secolo and Matteo Burgsthaler (of role in 4 matches in the season 2013/14 to substitute Birarelli – busy with the national team first and injured after) were the only players born in Trento to be captains. The most popular role to wear the band was the spiker: five players of this role to wear it, taking into account not only Giannelli, but also Tofoli, Meoni, Grbic, and Raphael. The opposite spiker was the least “suitable”: only Sartoretti (captain in the season 2004/05) had the honour to be the most representative player in the list of games and… ranking. Among the statistics curiosities, it should be noted a particular one for Lanza, who has played half of his games in the first team wearing the band (150 out of 300).

Below the complete list of those who have fulfilled the role of captain in the twenty-one seasons of activity of Trentino Volley, sorted according to the number of games played in this role: