Here are the World Champions! Lavia, Michieletto and Sbertoli joined the group 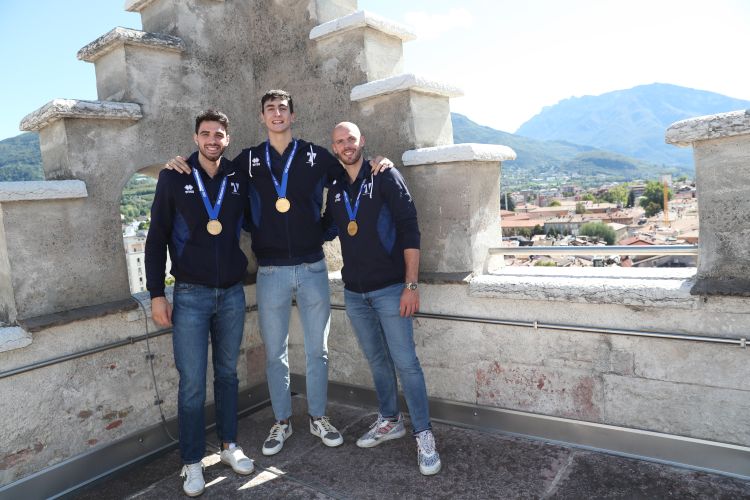 Trentino Volley, Trento and the entire province re-embraced today the World Champions. A little more than a week after the Katowice Final that gave them the 2022 World Championship title with the Italian jersey, Daniele Lavia, Alessandro Michieletto and Riccardo Sbertoli are therefore back in town to join the Itas Trentino group and start their training ahead of their debut in SuperLega Credem Banca 2022/23. Before taking the afternoon training session for the debut of their yellow-blue season at the BLM Group Arena, the three players were received in the morning at the provincial palace by the President of Trentino Maurizio Fugatti and the Sports Councillor Roberto Failoni and then at Geremia Palace by Mayor Franco Ianeselli. In this way the authorities wanted to thank the three athletes of Trentino Volley for their great achievement, handing them official awards and reiterating the great pride of the territory for this historic victory. In addition to the institutional moments, there was also time for a very pleasant unscheduled event; at the end of the meeting in the City Hall, the Mayor wanted to personally accompany the three World Champions to the top of the Civic Tower (which has always been the symbol of Trento) to admire together with them the city from above.
“I brought you from the roof of the world to the roof of Trento - Mayor Franco Ianeselli explained to the yellow-blue players; "let me address a heartfelt thank you on behalf of the city. As we followed the final from home we were struck by your expressions: we had our faces contracted with tension, while you were incredibly calm. You gave us a lesson in how to deal with difficult situations. This recognition is for you and for the whole Trentino Volley, because today we can say that the volleyball played in Trento is the best one in the world".
"The message that Sbertoli, Lavia and Michieletto have managed to give to Trentino and to so many young people, offering them one more reason to approach sports and volleyball in particular, is extremely important - Provincial President Maurizio Fugatti had previously said - “The international results are both proof that Italy and Trentino are successful in all disciplines, and a crowning achievement of the efforts of a company like Trentino Volley to let the youth movement grow”.
From their side, the three newly crowned World Champions were nearly amazed by so much attention, a precise sign that they still have to realise the importance of their achievement.
“These celebrations let us understand, little by little, what we have done”, confirmed Daniele Lavia, “eight days may still be a short time to notice it, but the best thing is just to remain the same.  I hope that there will be more celebrations at the end of this season, because I would like to win again with Trentino Volley.”
“I wasn’t born in Trento, but actually I’m an acquired Trentino and these moments fill me up with pride” explained Alessandro Michieletto “I’m cheerful to have done something important for this region and for its volleyball team. Coming back to train with teammates at the BLM Group Arena is always nice, we start a new season today, and we know very well what our goals are and we cannot wait to start chasing them”.
“Starting over with these celebrations is wonderful, different and unusual”, added Riccardo Sbertoli, “I’m so happy to be back in Trento and to breathe this atmosphere of great euphoria. Winning the World Cup gives us additional confidence and awareness in our means; maybe we are more tired than our teammates, but we feel the adrenaline rush and lots of energy."
With their arrival, Angelo Lorenzetti has now at his disposal thirteen of the fourteen players of the new shortlist; waiting for the new libero Gabriele Laurenzano (who is engaged until Sunday in the Under 20 Italian team for the European championship), the pre-championship training will start today and will culminate in the four-way competition that Itas Trentino will dispute next weekend in Biella with Modena, Monza and Civitanova.