SuperLega’s rehearsals during the weekend in Biella 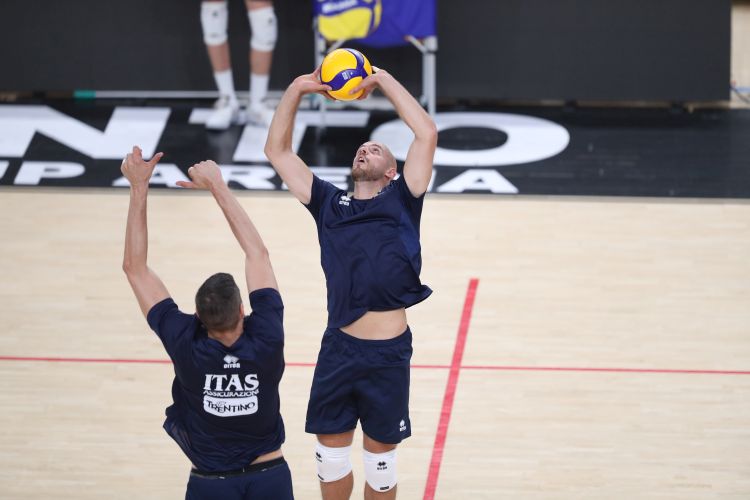 The upcoming weekend will be a rehearsal-weekend in view of the debut in SuperLega Credem Banca 2022/23 for the Itas Trentino. On Saturday 24th and on Sunday 25th September, the yellow-blue team will therefore be on stage in Biella in order to compete for the four-way competition called “Volley under Monte Mucrone”, in which Cucine Lube Civitanova, Vero Volley Monza and Modena Volley will be taking part, too.
It will be the Emilians, already faced twice during the pre-season, who will challenge the team coached by Angelo Lorenzetti during the second semi-final on Saturday at 8 p.m. (the first one will be played at 5 p.m. by the other two teams). On this occasion, Itas Trentino will take the field for the first time with thirteen of the fourteen members of the new shortlist (just the libero Laurenzano won’t be there) and it will try twice as hard (it is foreseen the Final for the third place at 3 p.m. on Sunday and the Final for the first place at 6 p.m.) to improve its game techniques and acquire that rhythm-competition that, at the moment, only the members back from the World Championship (the Worlds Champions Lavia, Michieletto and Sbertoli and the Serbians Lisinac and Podrascanin) can take advantage of.
On the other side of the net, Kaziyski and his teammates will find opponents with a full roster; few days ago, Modena team re-embraced the Brasilian setter Bruno, and the previous week it did the same thing with Ngapeth and Lagumidizija, Galassi (the last athlete who got back from Brianza) will be at the centre of the net again for the Monza team, while Civitanova team has already played the first friendly game at full strength on Wednesday evening.
In Piedmont they are looking forward to this event; tickets pre-sale for the Biella forum on this weekend are going grandly, also thanks to the possibility to see seven recent World Champions of the Italian team playing live; in addition to the three champions of Trento and Galassi of the Monza team, there will also be Anzani, Balaso and Bottolo in the Lube’s rows.