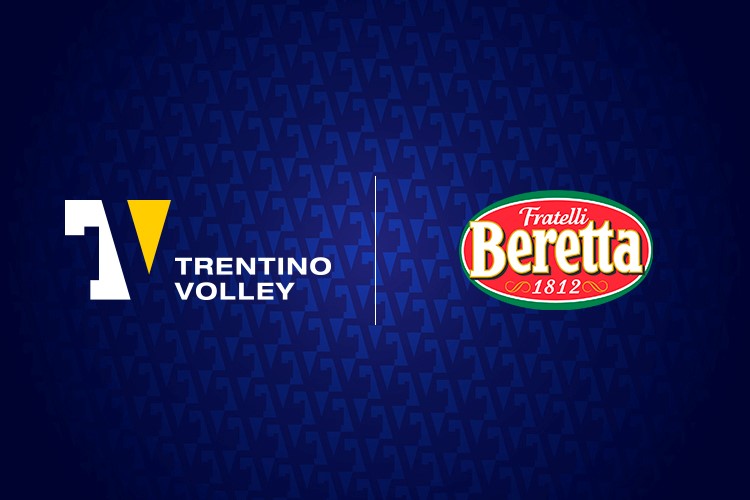 Among the many new features for the 2022/23 season, Trentino Volleyball can boast a particularly prestigious and significant one.
Starting October 2nd, the date of the team's debut in the men's SuperLega championship, Itas Trentino's jerseys will feature the renowned logo of Fratelli Beretta, the new golden sponsor of the yellow-blue team. The sponsorship agreement with the historic company, an excellence in the agri-food sector and synonymous with Italian style around the world for eight generations, was signed in recent weeks and will allow the Trener club to boast an internationally renowned brand on its uniforms.
"It is with great pleasure that we welcome Fratelli Beretta into our supporter pool for the season that is about to begin, - said Trentino Volleyball President Bruno Da Re - . It is a brand that presents itself on its own, among the best known in the world as far as the agri-food sector is concerned; being able to display it on our game jerseys, in the main arenas of Italy, Europe and the World, will be a boast as well as a great pleasure."
"We strongly believe in the value of this project, which marks our return to the world of men's volleyball after so many years and allows us to work alongside a reality of excellence in Italian sports such as Trentino Volley - commented Lorenzo Beretta - Vice President & Commercial Director Beretta Group - . A reality to which we feel particularly close because we share its core values: strong belonging to the territory, team spirit, tenacity, passion, healthy competition and well-being of body and mind."
The partnership with the Beretta Group, which is returning to the top men's volleyball league 30 years after the last previous Wuber Schio championship, will not end with the presence of the logo on the game jerseys of the men’s official team or with the slider advertising message on the  led video courtside and balustrade of the arena in every official match Itas Trentino will play, but it will also have a great impact on the Company's information materials, such as the website and match program, and in the renovated hospitality area of the arena (open again from October 2nd after last seasons' forced closure due to pandemic), where Beretta products will be the absolute protagonists.For more information:  www.fratelliberetta.com