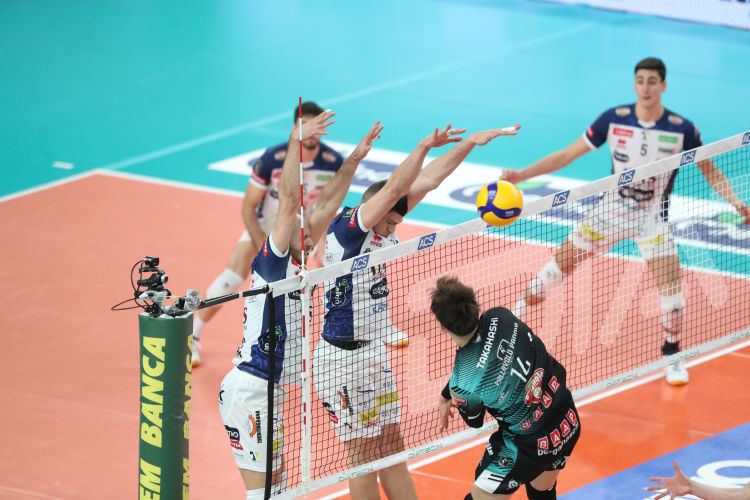 Match report. For the third and last home game in a row, Angelo Lorenzetti (in his 300th game on the yellow-blue bench) confirms the traditional starting six, lining up Itas Trentino with Sbertoli as setter, Kaziyski as opposite, Michieletto and Lavia as hitters, Lisinac and Podrascanin as middle players, Laurenzano as libero. Padova replies with Saitta as setter, Petkovic as opposite, Takahashi and Desmet in position 4, Crosato and Volpato as middle players, and former Trentino Volley player Zenger (rewarded by fans and Society before the opening whistle) as libero. Since the start the yellow-blue team has been very determined, especially on serve. Sbertoli's and Kaziyski's aces immediately pushed the hosts ahead (4-2 and 6-3), then a block by the same setter and one by Podrascanin inspires the breakaway (9-4). Cuttini interrupts the game and makes a change (Asparuhov in the place of Takahashi), but without being able to curb the run of the yellow-blue lineup, which at break point continues to rule the roost (14-8 and 20-10) also thanks to Lavia's good moment. The 1-0 for ITAS lead the set tally came as early as 25-15, with the final attack by the Calabrian itself. The start of the second partial was more balanced, in which Trento immediately tried to dig the difference with Kaziyski (5-3), but was thwarted in its attempt by Petkovic (8-7). Lisinac then takes care of it with his service (also two consecutive aces) to sign the acceleration (from 10-9 to 13-9); later Petkovic misses from set 4 and the yellow-blue fly to +5 (16-11), forcing the opponents to hide at time out. At the restart there is no more competition, as Itas Trentino runs fast and gradually increases its lead all the way with Kaziyski (20-13, 23-15 and 25-16). The yellow-blue team also directed the third set from the very first serves, always pushed by the serve and the great intensity shown in attack, especially by the Captain and by Lisinac (5-3, 9-5). Padua reacts until 11-8, then gives way to a further solo of the hosts (15-10) with Lavia. In the final Lorenzetti also offers space to D'Heer, Pace and Nelli (on court for Podrascanin, Laurenzano and Kaziyski), without losing the control of the game at all (20-16), at least until Petkovic goes wild (21-19). It's just the last gasp, though, because after the hosts' time out, it's up to Michieletto to get everyone to agree (25-21).