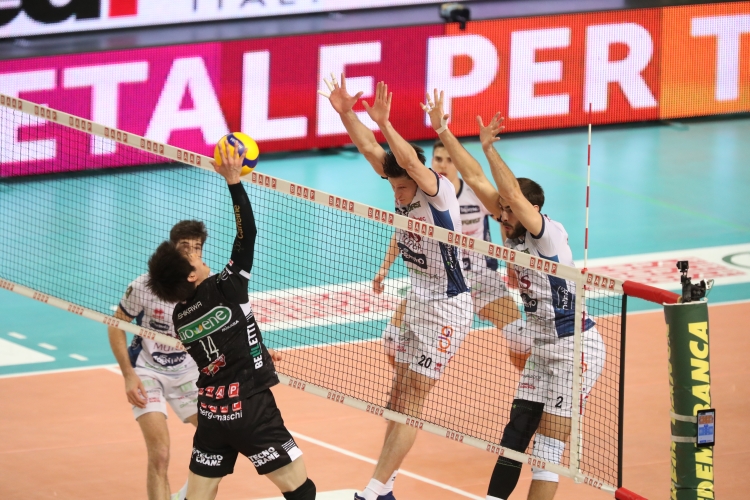 The chronicle of the match. The starting six chosen by Angelo Lorenzetti for his Itas Trentino on this occasion includes Giannelli in the direction, Vettori opposite spiker, Russell and Kovacevic hitter spiker, Candellaro and Lisinac middle-blocker, Grebennikov libero. Kioene Padova responds with Travica setter, Hernandez opposite spiker, Ishikawa and Randazzo hitter spiker, Volpato and Polo middle-blocker, Danani libero. Since the first exchanges the two teams don't spare themselves, alternating at the lead (2-3, 5-4, 8-9) and working very well in the break phase. A double gialloblù block (Russell on Hernandez and Vettori on Ishikawa) gives back the minimum advantage to the guests, with Padova that, however, with Hernandez quickly turns the situation upside down (14-15). A block of Travica on Russell and a counterattack by Ishikawa give the +3 to the Venetians (15-17 and then 18-21, Trentino time out); Kioene becomes ruthless in the break point phase and with Hernandez closes the account already on 19-25.
Trento's recovery passed to Lisinac's services, who immediately put the guests in the lead in the second set (7-2); Baldovin's time out immediately took effect, as the Bianconeri with Hernandez and Ishikawa immediately returned to the game (7-5, 11-9). Russell's attack and serving produces another important acceleration (13-9 and then 15-10), then Kovacevic widens the scissors (20-14) and puts the tombstone on the single fraction, which ends on 25-20 (Uros's hands out).
In the third set the Itas Trentino is projected ahead on the 8-5 thanks to the net continuity of the pair of place 4, which defends and attacks with great effectiveness. Lisinac and Vettori also take an active part in the break point phase, pushing the Gialloblù to the maximum advantage (12-7, time out Baldovin). Padova tried to climb up the slope (14-10), but Trento sniffed out the danger and restarted the momentum (19-13) with great attention in defence. A newcomer Casaro's ace and an attack out by Lisinac forced Lorenzetti to interrupt the game on 21-17; on the second half Trento conceded nothing and went 2-1 on 25-18.
The fourth set returns to be balanced (5-5, 9-8), until Hernandez offers the first opportunity in favour of the locals (11-13). The team recomposes immediately the rift (13-13); after the teams play point to point (17-17, 21-21). The set extends to the leads (24-24); Russell has to exit due to a contact with Hernandez. The guests with Sosa Sierra cancel six set balls and give up at the seventh (28-30), realized by Ishikawa (ace).
The tie break is hard-fought (4-4, 8-7); Padua exploits two consecutive mistakes of Kovacevic and flies to 9-12, Trento reduces the distance (11-12) and than with Giannelli at the service the team gains the first match ball (14-13), but Hernandez cancels it and then the hosts will have another five. Itas Trentino will cancel all of them in turn, Lisjnac makes a block on Hernandez (19-18) and closes the set with another block of Gianelli always on Hernandez (20-18).