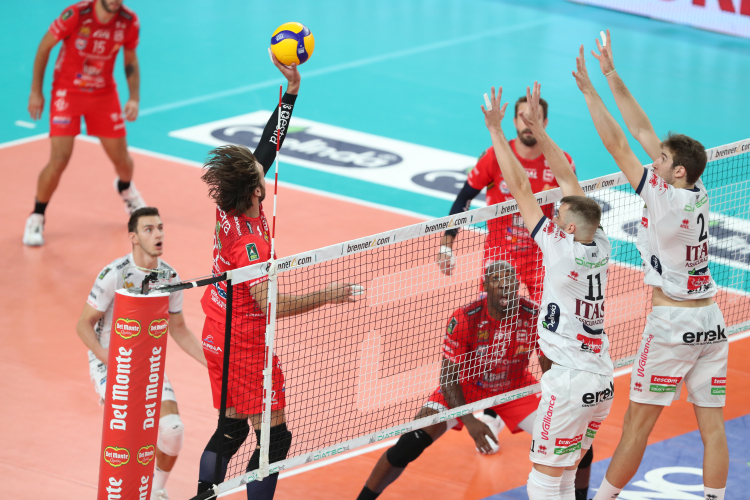 Sum up of the match. Itas Trentino showed on pitch, in front of the fans (in a limited number) in a modified line-up for six seventh, in comparison to the one of last season; without Lisinac (on the terrace) and Lucarelli (on the sidelines, but not able to play) the only player who remained was Giannelli leading the team. All the others were new: Nimir as opposite spiker, Cortesia e Podrascanin as middle-blockers, Kooy e Michieletto as side hitters and Rossini as libero. The line-up of Civitanova at the BLM Arena was: De Cecco at the set, Rychlicki as opposite spiker, Leal and Juantorena hitter spikers, Anzani e Simon as middle-blockers, Balaso as Libero. The home players prevailed at the very beginning, thanks to a great action of Nimir (who scored immediately 3 points) the scoreboard marked 5-3; Juantorena and Simon quickly closed the gap (6-6). Thanks to Cortesia, Itas Trentino gained 2 more points (9-7), but due to Michieletto’s net invasion Civitanova got 12-12.
Osmany marked another point for Cucine Lube (13-14), Trento recovered (16-17) before suffering an ace by Leal, being at 18-20 Lorenzetti feels forced to call a time-out. Just after the break the ace by the Brazilian player and a block by the new entry Hadrava increased the detachment even more (18-22); the guest players defended their advantage well (20-24) and changed the field at 21-25. During the second set, the gialloblù team alternated powerful services by Kooy (4-2) and some rich in variations by Giannelli (8-4), Podrascanin showed his ability at the net. Michieletto had an active role too, at the break point (attack and ace) and Itas got a great advantage (11-5). As Nimir played on attack the team got 7 points (17-10) and then +8 (19-11); such an advantage let Lorenzetti’s team led the set to the end without any problems (22-16 and then 25-19) no matter Lube’s attempt to gain more points during the match.
On the impetus, Trento began well the third set too, thanks to Michieletto’s ace and the excellent ability of Namir at the attack (3-0 and 6-4), Leal and Simon immediately scored some points for Cucine Lube (7-8). Thanks to an attack and a block team Cucine led the play again and gradually gained advantage, in part thanks to Juantorena e De Cecco (9-11, 11-14).
Once they got 13-19 (thanks to a Simon’s block against Nimir) the guest players were definitely leading the set, gaining it 16-25 (another block, this time against Michieletto). Forth set was more balanced, gialloblù team, already 6-8, began fighting for every single score (11-11). Kooy attacked strongly and Michieletto scored another ace (15-12), De Giorgi called a time-out.
Back on field nothing changed (18-15), then Lube got a point due to an error by Kooy (19-18); Podrascanin led the team (23-20)and then defended the advantage 25-21. During the tie-break Itas Trentino concentrated all the energies (5-3) and Michieletto scored again (8-5). Nimir shot an ace and a serve and finally led the end of the match to a victory for gialloblù team (11-7, 13-8 and finally 15-9).