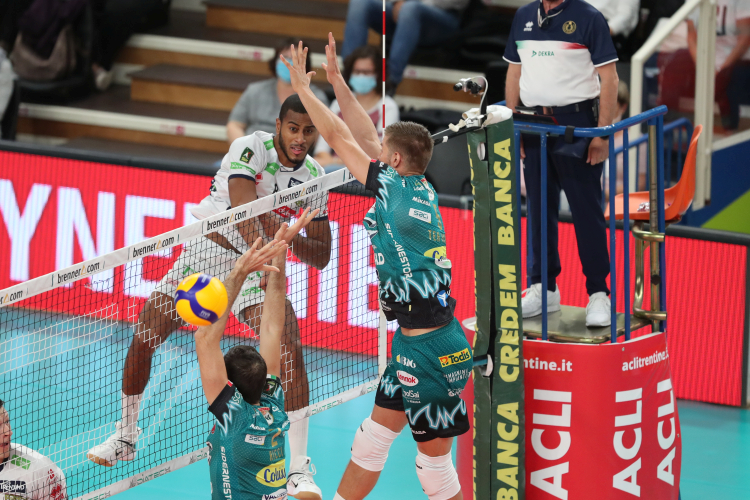 Match report. Among gialloblù players the only absent is Michieletto (he’s still quarantined given that two weeks ago was positive to Covid-19); Lorenzetti confirms the line-up that played 7 days ago in Piacenza: Giannelli at serve, Nimir as opposite, Kooy and Lucarelli as hitter-spikers, Podrascanin and Lisinac as middle-blockers, Rossini as libero. The other team’s line-up consist of Travica as leader, Ter Horst as opposite, Leon and Plotnytskyi as spikers, Ricci and Solé as middle-blockers, Colaci as libero. At the beginning gialloblù team was determined and impetuous; the Dutch opposite shows his skills since the very beginning, thanks to a serve and an attack scores 3-1 and then 6-2. The other team isn’t any different, Leon from the line of nine meters scores 7-7, the Polish at place 4 also scores a pipe and begins the team’s advantage (7-8 Lorenzetti calls a time-out). Both the teams are battle hardened and the match goes point to point (9-9, 12-12); on 13-13 Giannelli leads the play getting Nimir away from his marker and scores a block against Leon (15-13 Heynen calls a time-out). As the play begins again, Nimir increases the advantage, he blocks Ter Horst and attacks twice scoring 19-14; the opponent team can’t recover is going to lose the set for (23-15), Vernon-Evans is playing as substitute for Ter Horst. Kooy concludes the set (25-17) and the teams change the field.
During the second set, Heynen  let Ter Horst and Russo (who entered at the end of the first set) continue to play, again the match is point to point (4-5, 9-7, 10-11), in general Perugia is particularly good in reception and Leon attacks. Trento keeps the pace until 14-14, then Ter Horst is relentless (14-16, Lorenzetti calls a time-out); right after Nimir scores  and gets to 17. Perugia is running fats (19-20) then increases to 21-23 thanks to a great block by Solé against Nimir. The opponent team wins the second set (22-25) thanks to the attack by the Argentinian.
Sir Safety Conad is riding the wave of glory of the previous set, Leon is the main player while Trento can’t stand the pace, also due to some errors (from 4-4 to 4-8). Lorenzetti stops the play twice in just a few minutes but nothing changes (6-11), Kooy tries to recover serving well and the team finally gets to (9-11). The opponent team feels the danger and plays extremely well (10-13 e 13-18) Plotnytskyi in particular shows his skills. Perugia soon wins 2-1 during the last part of the set and the advantage is ever-increasing (14-20 and 17-25).
Itas Trentino tries to react at the beginning  of the fourth set, Nimir scores (6-4) and then Lucarelli scores an ace 8-5. Heynen calls a time-out, as the play starts again Kooy keeps scoring (11-7) and so does Podrascanin (13-8). Russo does two blocks and tries to improve the action of his team Sir Safety Conad (14-12), gialloblù team runs fast to 18-13 thanks to the Brazialian’s serves and the attacks of the Dutch player. Thanks to a couple of attacks by Leon and an ace by Solé, Perugia recovers 19-18, Lorenzetti calls a time-out; gialloblù team soon reacts but Leon scores an ace for 22-22. In the end Perugia has the best, they gain a match ball and annul a set-ball getting to 25-25, then win the match thanks to Plotnytskyi ‘s serves (25-27).