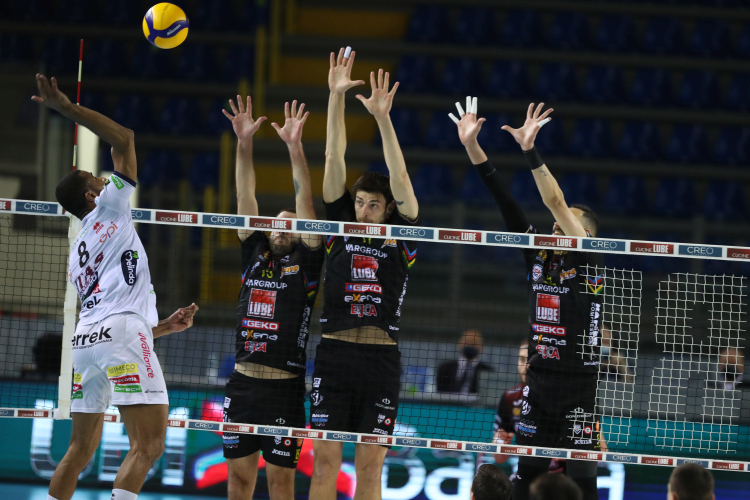 The Match 3 report. Itas Trentino is presented on the tricolor mondoflex of the Eurosuole Forum with Giannelli as setter and Nimir opposite spiker, Lucarelli and Kooy (preferred by Lorenzetti to Michieletto) in the band, Lisinac and Podrascanin in the center and Rossini libero. Cucine Lube Civitanova instead proposes itself with De Cecco as setter, Rychlicki opposite spiker, Juantorena and Leal spikers, Anzani and Simon middle-blockers, Balaso libero. The Gialloblù start is with the handbrake on (3-6, 6-10), also due to the difficulties in receiving; a good moment of Nimir is needed (attack and two direct aces) to bring the two teams back into close contact (13-15, Blengini time out). Trento comes back to minus four for specific merits of Leal (14-18), but then has a new blaze with Giannelli in the service that is 18-19. Lube starts again with Simon's blocks (19-21 and 21-24); seems to be the decisive point but in reality it is not because with Nimir serving, Itas Trentino goes to 24-24, then a block by Lucarelli on Rychlicki (26-25) and closes the score with the counterattack of the same Dutch (27-25).
The long wave of the giallo-blù victory in the sprint of the first set is felt even at the start of the second set, with Nimir, Kooy and Lisinac making the break points that make the guests fly first on 5-3 and then on 9-6, forcing Blengini to stop the game. At the resumption, Lube revives with Leal and Juantorena, quickly building a parity at 11 and then the advantage (11-13) that passes through Rychlicki's hands. In the central part of the set the hosts increase their advantage (11-15), benefiting from Osmany's good performance; Trento falters but dates comes back to 18-19, before leaving the way this time definitively to Simon's actions: 22-25 and 1-1.
Cucine Lube continues to hold the reins of the game even in the third set; the hosts start already on 3-6 and then on 6-9, taking advantage of the difficulties of the giallo-blù team in the changeover phase. However, Lorenzetti's team does not lose the desire to fight and responds with Lucarelli to 8-9. The hosts sense the danger and start again with Leal (11-13 and 11-15); it is the decisive push to bring the match to 2-1, because later Giannelli and his teammates manage to replicate only until 15-17, before giving way to a wild Juantorena and a rediscovered Rychlicki (17-25).
The two teams return to fight point by point at the opening of the fourth period (5-4, 8-9); Rychlicki pushes his team to +2 (10-12). Itas Trentino disunites, goes down by four points (12-16), a margin that is no longer able to recover also because on the other side of the net Cucine Lube no longer concedes anything in the break phase (17-21 ) and closes the match at 21-25 with an unstoppable Leal at the net.