SuperLega, on Sunday in Vibo Valentia the first seasonal away match 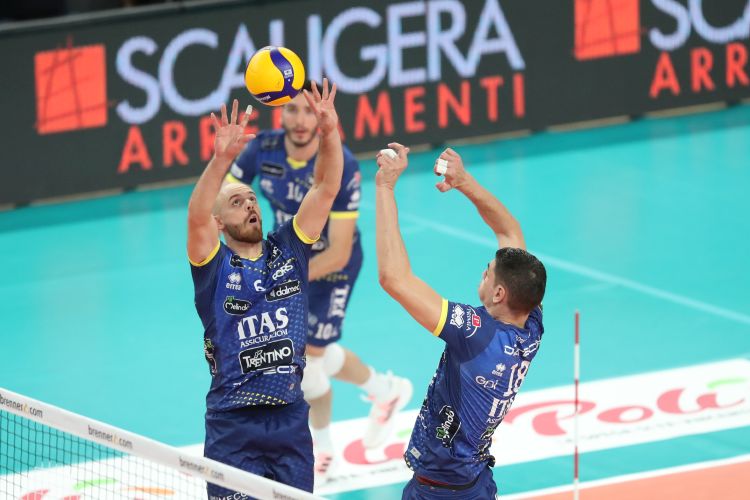 This weekend, it will be played the second round of regular season of SuperLega Credem Banca 2021/22. After the convincing home debut on Tuesday evening, Itas Trentino will play its first away game of its championship, facing off Tonno Callipo Calabria at the PalaMaiata in Vibo Valentia on Sunday 17 October. The kickoff is at 20.30: live commentary on Radio Dolomiti and live streaming on OTT Volleyball World Tv.
HERE ITAS TRENTINO The three points obtained against Verona have immediately offered enthusiasm and important points to the yellow-blue formation, which wants to close the first week of matches of its season hunting for another important result for the ranking.
“We are going to face one of the most important away matches of our regular season, because Vibo Valentia is one of the adversaries that concentrates, just like us, permanently occupying a position of the ranking already behind of the main favourites – explained the coach Angelo Lorenzetti - . The hosts arrive at this appointment enthusiastic by the win in Taranto and surely want to show their best version in the first home match of the season, but also we started the championship on the right foot and want to continue on this path, having more training with the whole team and even more conviction.”
Trentino Volley will arrive at Vibo Valentia this evening, at the end of a trip by bus started this morning towards Bergamo, continued then by plane to Lamezia Terme and again by bus. For the second appointment of regular season, the technical staff has available all thirteen players of the team.
The game on Sunday will be the 893° official of the history of the Club, the 527° of regular season, and will see the yellow-blue Company hunting of the 298th away win – a result that in regular season is missed from 24 January (win in three sets in Calabria).
FROM 2010 THE YELLOW-BLUE ALWAYS WIN THE FIRST SEASONAL AWAY GAME OF REGULAR SEASON Itas Trentino will present itself in Calabria strong of a favourable tradition that lasts from eleven consecutive seasons as compared to the first seasonal away game in regular season, always ended with a win from 2010 till today. The latest time that the yellow-blue Club was defeated in the first away game dates back to a match played in Vibo Valentia: 4 October 2009, defeat by 3-0 at the PalaValentia in the second round of the championship.
THE OPPONENTS It’s a deeply renovated Tonno Callipo Calabria the one that awaits the visit of Itas Trentino in the first seasonal appointment in front of its audience. Compared to the last season, only three players are confirmed (the setter Saitta, the libero Rizzo, and the middle blocker Gargiulo) in a team that the coach Valerio Baldovin (also him reconfirmed in the staff) has based on the Brazilian class of the spikers Mauricio Borges, Douglas, and on place 3 Flavio Gualberto. The florid success obtained on Sunday evening in Puglia (3-1 in Taranto) has shown that the new chosen path by the yellow-red Company can give satisfactions, also because there are the expert middle blocker Candellaro (former, in Trento between 2018 and 2020 with 81 attendances) and a young bomber of international level like the Japanese Nishida to complete the team. The pre-season has given important indications on the validity of the Calabrian project, taking into account that the team has often fought au pair in the friendly games played with Civitanova and Perugia.
PREVIOUS MATCHES Trentino Volley and Callipo Sport Vibo Valentia have behind a long tradition of matches, started seventeen years ago (3 October 2004) with the first official match in regular season (away success at the tie break for the yellow-blue). The report of thirty-five previous matches, among which stand out also five matches of Play Off and two of Italian Cup, is in favour of the yellow-blue Club for 29-6. The most recent match dates back to a game played at the PalaMaiata with a clear yellow-blue win: 24 January 2020, 3-0 with sets of 25-13, 25-16, 25-20 in the match valid for the second leg of the latest regular season. The first leg at the BLM Group Arena was played on 25 December 2020 and saw the win by 1-3 of the Calabrian team with sets of 18-25, 25-22, 23-25, 23-25. We must go back to 11 December 2016 to find a home win of Vibo Valentia (3-2 at the PalaValentia). In Calabria, Trentino Volley has won fourteen out of the eighteen official games already played and, in seventeen circumstances, it went to the tie break; only in one of the four defeats in its history on the field of the yellow-red the ko arrived in less of five sets: 0-3 on October 2009 in a match of the second first-leg round of regular season, as happened on 3 October 2004 as well (yellow-blue success at the tie break).
THE REFEREES The match will be directed by Gianluca Cappello (from Sortino - Sora, in Serie A from 2004) and Maurizio Canessa (from Bari, of role from 2009). For Cappello, the latest match with Trentino Volley was exactly a year ago (18 October 2020, home defeat with Perugia), while for Canessa it dates back to 10 January (3-2 against Monza), always at the BLM Group Arena.
RADIO, INTERNET, AND TV The match will have a full live commentary by Radio Dolomiti, network partner of Trentino Volley. The frequencies can be found on www.radiodolomiti.com, where it will be possible to listen to the radio commentary in streaming.
There is also the live streaming on OTT "Volleyball World Tv" (paid service). For more information about the service: www.welcome.volleyballworld.tv/faq-it.
On TV, the recap of the match will be broadcasted on RTTR, tv partner of the Company, on Monday 18 October at 21.30.
On Internet, the point-by-point updates will be made by the website of Lega Pallavolo Serie A (www.legavolley.it), by www.trentinovolley.it and by the yellow-blue Social Networks (www.trentinovolley.it/facebook and www.trentinovolley.it/twitter).