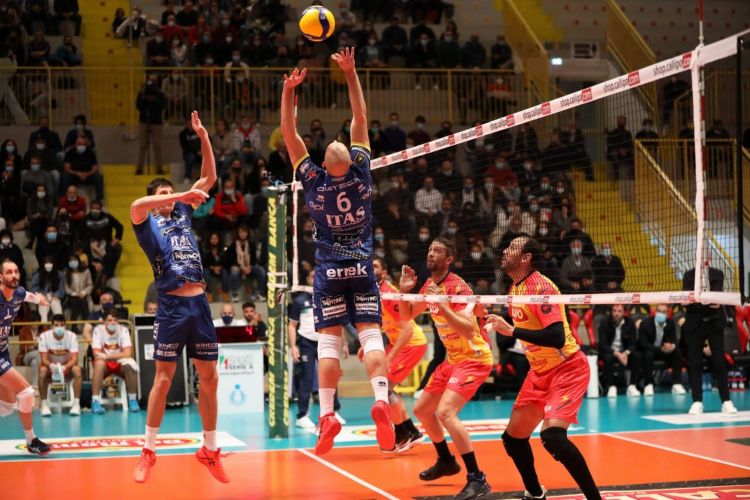 The match report. Angelo Lorenzetti faces the first away appointment of the season inserting Alessandro Michieletto in the starting six as spiker; Pinali makes space for him, whose place is tactically taken by Lavia (opposite spiker). The others starting six are the same seen on the field Tuesday evening against Verona: Sbertoli as setter, Kaziyski as spiker, Lisinac and Podrascanin as middle blockers, Zenger libero. Tonno Callipo Calabria responds with Saitta as setter, Nishida as opposite spiker, Douglas and Mauricio Borges as spikers, Flavio and Candellaro as middle blockers, Rizzo libero.
The yellow-blue start is promising: block and defence function well and put pressure on the local system of change-ball (2-0 and 8-5), with Podrascanin who makes good guard on Douglas and Candellaro, forcing the yellow-red to call a time-out. At the restart, a block of Lisinac on Mauricio Borges gives the maximal advantage (11-7), which lasts only a few seconds because Nishida and the Brazilian close the gap (11-10). The balance doesn’t last long, because Itas Trentino makes an advantage with Lavia and Podrascanin (18-15), and then takes over with the ace of Michieletto (23-18). This is the decisive cue, because then two attacks on reception make the yellow-blue win the first set (25-21).
In the second set, the guests continue to play like in the precedent one: block and defence function well and allow the yellow-blue to take over (from 6-6 to 11-8), taking advantage of the good moment in attack of Kaziyski and of the difficulties of Nishida in the same fundamental. Baldovin interrupts the game, but, at the restart, a turn at service of Lisinac, spiced up by several break points in attack (Lavia on the shields), makes Itas Trentino go to +6 (14-8). In the second half of the set, Lorenzetti’s team is on fire (20-13 and 23-13) and closes already on 25-16, again thanks to Daniele Lavia.
In the third set, Vibo Valentia tries its best to recover, forcing the service and taking advantage of some yellow-blue mistake (7-9). Lisinac puts the score in a tie, but later Tonno Callipo Calabria scores again with Nishida and the blocks of Flavio (13-16). Trento closes almost immediately the gap (16-16) and throws the sprint towards the final part of the set, which, after a long point-to-point (19-19, 23-23), arrives thanks to a block of Lavia on Borges (24-23). Tonno Callipo Calabria cancels the occasion of the guests and takes over with a block of Nishida on Lavia; on the fourth occasion, it’s a block of Saitta on Kaziyski to close the set on 27-29 and to take the match at the fourth set.
Trento’s reaction is fierce and determined, and passes through the hands of Lavia and Lisinac (5-2); the locals try to move close (6-5), but Michieletto (ace) distances them (9-6, time-out by Baldovin). Later, it’s Alessandro, together with Lavia, to protect the advantage and increase it (14-9). Tonno Callipo doesn’t give up and goes to -2 (20-18), but then definitively leaves room to Itas Trentino that, with Kaziyski and Lisinac, doesn’t give anything and closes the set on 25-21.