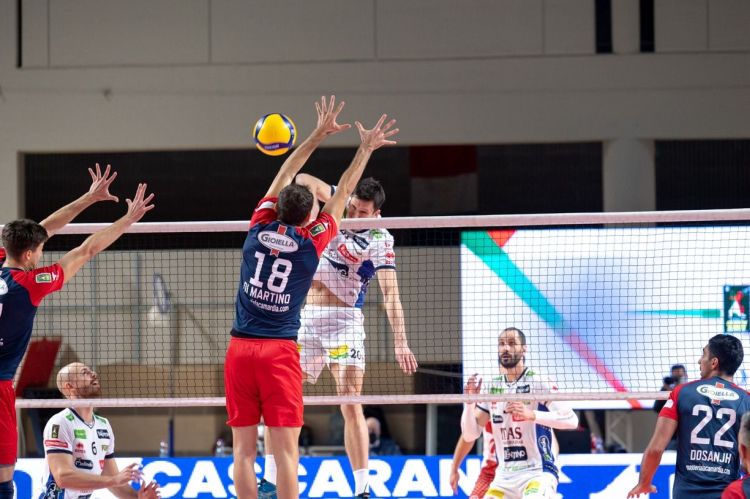 The match report. Itas Trentino gets back Kaziyski, but still has to do without Podrascanin (still in fiduciary isolation); Lorenzetti therefore relies again on the module with three hitters in the starting six: Sbertoli at set, Lavia opposite, Michieletto and the Captain in place 4, Lisinac and D'Heer in the middle, Zenger libero. Taranto has to do without Joao Rafael and responds with Falaschi at the direction, Sabbi opposite, Palonsky and Randazzo at set, Alletti and Di Martino in the middle, Laurenzano libero. The start of the yellow-blue team is immediate: Michieletto (attack), Lavia (block on Sabbi) and Kaziyski (ace) immediately set the score at 4-1. Afterwards, Trento gets stronger in the break point phase (8-4), so much so that at 11-4 Di Pinto has already exhausted the time outs at his disposal. In the middle part, Itas Trentino presses hard on the accelerator until 18-10, then drops the tension and Taranto, with Falaschi serving, goes up to minus four (18-14). Lorenzetti's interruption of the game doesn't help his team regain lucidity, which also suffers from Randazzo's serves and sees the disadvantage progressively recovered (22-18) until 23-22 with Sabbi in the spotlight. Alessandro Michieletto takes the chestnuts off a fire (25-23).
After the change of court, Gioiella Prisma tries to confirm the good moment already shown in the end of the previous set (2-4); the yellow-blue players respond up to 5-5, then they suffer a new partial (6-9), making too many mistakes. At the restart, Kaziyski fixes a couple of previous mistakes and with a block and an attack, brings the team back to a tie at 11. The central phase of the period sees Itas Trentino escape on +2 (15-13) thanks to Michieletto, then Taranto turns the situation around (15-17) with two very heavy blocks by Di Martino (on Alessandro himself and on Matey). Lisinac's attack and block and Kaziyski's ace are enough to put Trento ahead again (21-20). On the last point, however, the visiting team loses focus (23-24), cancels a set ball, gets one with Lavia (25-24), fails to close with Michieletto (out for 25-25) and is punished by Randazzo (25-27) at the second opportunity.
Itas Trentino reacts at the beginning of the third period (5-2), led by a wild Lavia at the net. The team responds with the usual Randazzo (5-7), but Kaziyski and Lisinac widen the gap after having reached parity at 9 (16-11). From then on, Lorenzetti's team doesn't concede anything (21-16), thanks to very high percentages in the changeover phase and to a driving Lavia (25-18).
Like the previous period, Trento starts strong in the fourth set (3-1) with Lavia and Lisinac still effective at the net. Taranto tries its best (6-5), then D'Heer and Lavia push the yellow-blue team to 13-9, up until 16-14. After Lorenzetti's time out, the yellow-blue team starts again with Kaziyski (21-16), towards the 3-1 final, which materializes on 25-19.