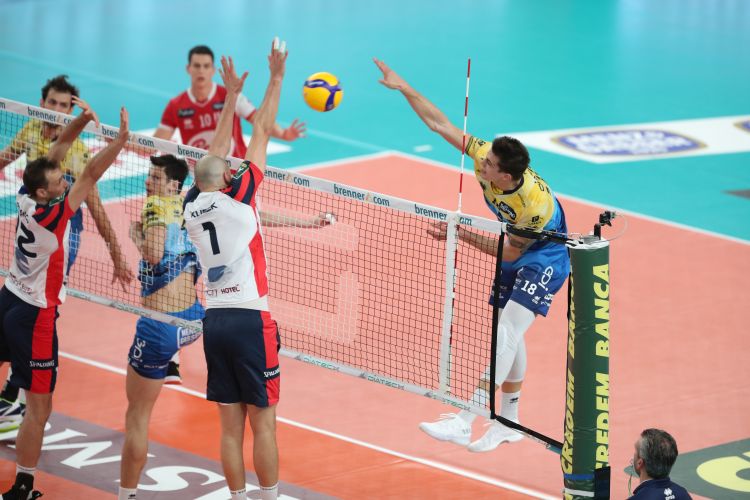 After three weeks off, SuperLega Credem Banca 2019/20 starts again: the fifteenth round of regular season, the second of the returning round and the first of 2020 is going to be played between today and Thursday evening. Itas Trentino will start off the new year with an away match in Monza, on Vero Volley’s court. The match will begin at the Candy Arena at 20.30: live broadcast on Radio Dolomiti and live streaming on Lega Volley Channel at the link www.elevensports.it.
HERE ITAS TRENTINO All players have return only on Monday and the team is now full and ready to continue the journey in the championship, with just three weeks of training in the gym, without any test match since four players were away. To stay close to the teams above in the rankings, the team needs another success, after the one already obtained the day of Christmas.
“We are going to Monza trying to obtain some points but also with the purpose of finding again that important and precise group identity - explained Angelo Lorenzetti on the eve -. The result we obtained in the going round (3-0 win) does not count, because this time Vero Volley can count on the setter Orduna, who will set a different play and the team can also rely on the home-field factor. The environment is denser, we have to deal with it to win”.
Itas Trentino will reach its seventeenth match with the whole roster. The full team will reach Monza already today in the evening, after a training session with the ball at the BLM Group Arena, early in the afternoon.
Trentino Volley will play its 832nd official match in its history trying to win for the 581st time: it has won 304 times in home matches and 276 on away ones up until now. It has not lost on an away match since 24th November (1-3 in Modena).
THE OPPONENTS The first match of the year is also the first match at home of the season for Vero Volley Monza. In fact, it has played the matches of the going round in Busto Arsizio (5) and in Desio (1), because its facility needed to be used for the TV program named “X Factor”. The team is trained by Fabio Soli and is placed ninth in the rankings with fifteen points. This could be another reason to try to win to get closer to the Play Off, a result that the team has been struggling to achieve since they have failed to get access to the quarter finals of Coppa Italia. The team, trained by the former Ravenna’s coach can count on top-level players, such as the Polish opposite-hitter Kurek (fourth bomber of the tournament with 250 points in thirteen matches), which the setter Orduna is increasingly looking for to build the game. The high-balls trio is completed by the French Louati and the Czech Dzavoronok (really efficient by serving). In the middle there are the Bulgarian Yosifov and the Italian Beretta and Galassi, who have proved themselves to be good blockers. Monza will reach this challenge after three friendly matches in the last seven days: two against Piacenza (one 1-4 loss on 8th January in Emilia and one 3-2 win on 11th January in Brianza) and one against Verona (4-1, on Monday evening).
PREVIOUS RECORDS The two teams have already faced each other fifteen times, with a balance clearly in favour of Itas (14-1). The only victory for Monza was by 3-2 at the Candy Arena on 4 March 2018. But the most exciting match has been that of a little less than thirteen months ago (23 December 2018 – the last match of the two teams in Lombardia): Itas won at the tie break after 165 minutes of play in the longest match in the history of the team. Trentino Volley also won other four away matches, three of which in just three sets. In the going round the team won by 3-0 (25-20, 25-16, 25-21) and the mvp was Russell. Itas had previously played other seven matches (all won) against another team of Monza: Acqua Paradiso; except for one time, the Candy Arena has always brought a lot of joy, also considering the 3-1 victories on 27 December 2009, on 30 January 2011 and on 8 January 2012.
THE REFEREES The match will be directed by Alessandro Tanasi (from Noto, in Serie A since 2002) and Rossella Piana (from Carpi - Modena, tenured since 2005 and refereeing internationally since 2014). This is the fifth time as referee in this season of SuperLega Credem Banca 2019/20 for Tanasi, one of which has been the home match of Trentino Volley against Verona won at the tie break on 9 November 2019. For Piana this is the sixth match of this regular season; the last match with Trento has been the 3-1 victory against Busto Arsizio on 3 March 2019 in Milan.
RADIO, INTERNET AND TV The match will be completely live covered by Radio Dolomiti, media partner of Trentino Volley. The link-ups from Monza will be made during “Dolomiti Sport Show”, the sport program of Radio Dolomiti. The frequencies to listen to the regional network can be found on the website www.radiodolomiti.com, where it will also be possible to listen to the radio report in live streaming.
The match will also be broadcasted in streaming video in the section “Lega Volley Channel”, on the website www.elevensports.it (paid service).
The full recording of the match will be broadcasted on TV on Saturday 18 January at 21:00 on RTTR, TV partner of Itas Trentino.
Point-to-point updates will be provided on the Internet by the website of Lega Volley Serie A (www.legavolley.it) and by www.trentinovolley.it, and also on the social media accounts of the team (www.trentinovolley.it/facebook www.trentinovolley.it/instagram and www.trentinovolley.it/twitter).